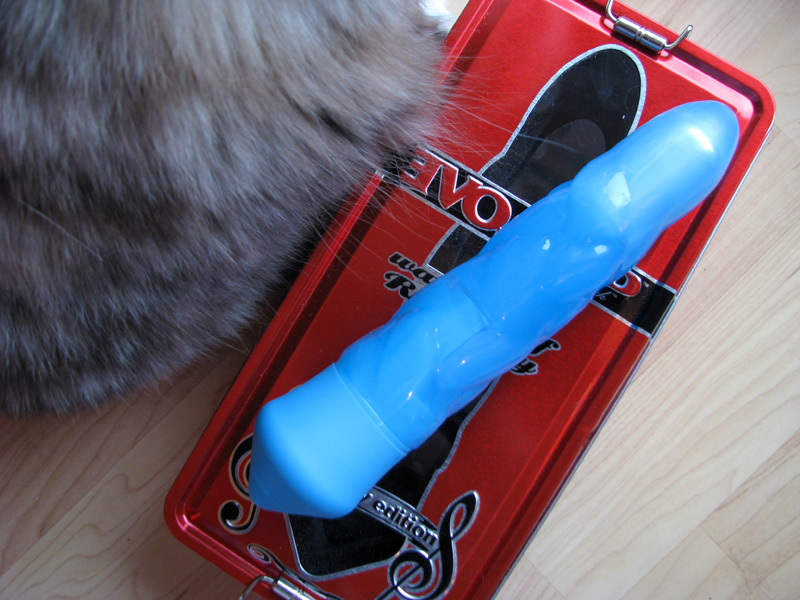 I should mention that the bottom of the box has a really odd sentence written on it: “This product is sold and should be used as an adult novelty only and should never be other than for external use.” Now, I’ve seen a lot of sex toy packaging, and a lot of “for novelty use only” messages, but I don’t recall any package ever explicitly forbidding the actual implied use of the toy itself. I know Evolved is probably just trying to cover their asses, but this takes skirting responsibility to new heights.

Also, the use of TPR isn’t really that commendable. Sure, in comparison to jelly, TPR certainly wins out, but it’s still porous and it’s far from the safest and most versatile material out there. This vibe is very pliable, somewhat tacky in texture, and has a slight synthetic smell to it, but I’ve seen/felt/smelled worse. The base of the toy is made of silky plastic (I’m guessing rubber cote of some sort) and is a bit large, but I found that to be a positive feature, as it makes the vibe easy to hold and thrust with.

The base unscrews to reveal the complicated battery compartment, which involves removing a piece of plastic, putting two AAs in it, and sliding it back in. I hate that kind of battery compartment, but whatever. Vibration is controlled by a small circular button on the base, which is fine, seeing as there are only three speeds. The bullet is located in the tip of the shaft — nice move, Evolved — and the vibrations are pretty damn strong. Due to being wedged inside TPR, the sound of the bullet is diffused, but the highest setting is still fairly loud.

Despite the shortcomings of TPR, I really enjoyed using this vibe. It was a good thickness and filled me up nicely, and the all three vibration levels were delicious and easily felt. I couldn’t feel the texture of the shaft, which looks woven or something, but I didn’t expect to be able to, as the texture is far too subtle. Thrusting was easy and quite pleasurable.

Since the bullet is in the tip of the shaft, I even tried this vibe on my clit. And it wasn’t so bad! I normally like very pinpointed stimulation on my clit, but the Rhapsody’s vibrations were strong enough to satisfy me (at least for a while).

Peruse the Evolved line at SheVibe.