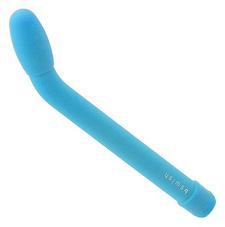 I like velvety plastic. It’s soft to the touch, yet hard enough to be noticeable when inserted.

I like thin toys — you know, the kind that don’t pose a threat to my insides.

And I seriously love bright colors. Really, how could I not like Bgee?

Bgee came in a tall, black matte box. I wasn’t especially fond of the lingerie-clad black and white and strangely cropped woman on the front, but at least she wasn’t faking an orgasm or making out with some guy’s neck. Also, the photograph of the blue Bgee on the box was a much darker blue than the toy actually is. Otherwise, the design of the box was almost… classy. A nice change of pace.

Inside the box, there was a pamphlet entitled “binformed” that included operating instructions in six languages and a limited 90-day warranty. The instructions didn’t give me any new ideas, but they would be helpful for a beginner.

Bgee takes two AAAs (not AAs as the box states), and they just pop into the end where the twist dial is (there’s also an O-ring for waterproof protection). Bgee doesn’t have a huge range of vibration levels, and the highest level isn’t anything special. However, the vibrations are quiet and have a rumbly quality about them, as opposed to a high-pitched buzzy quality, and I really like that.

Get the Bgee at SheVibe, She Bop, SexToyFun, or Come As You Are (Canada).