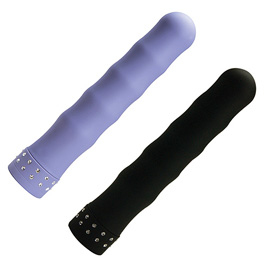 Other than my boyfriend’s penis, nothing else I’ve stuck in my vagina has been bigger than 1 1/4 inches in diameter. This vibe’s diameter is only 1 1/2 inches, which isn’t especially large for experienced toy/penis users. But that 1/4 inch makes all the difference for my wuss of a puss. Plus, this vibe doesn’t have an easy-entry tip, and it’s made of hard (albeit velvety) plastic.

And it… gyrates? We’ll see about that.

Yes, the monstrous Gyrating Massager only has 3 levels of vibration.

I thought C batteries would offer a much wider range of vibration levels (or at least a few weird functions or something), but no. Just jackhammer-esque loudness.

After acclimating my vagina to large objects with my Icicles No. 8, and then my Gold Ribbed Love Wand, I drizzled some lube on the end of the Gyrating Massager and inserted it. It wasn’t as challenging as I suspected it would be. In fact, it almost felt… good? Yes, as much as I was prepared to hate this toy based on noise alone, it certainly filled me up in a new way.

After putting it off for a while, I finally bit the bullet and turned the dial to the highest setting. Holy crap. It was not fun. The vibration was so strong that it actually made me want to pee. And it numbed my entire vulva. I seriously could no longer feel my bullet on my clit. I did notice that that battery rattling sound was muffled a lot when I had the vibe inserted, but the moment I pulled it out, it started rattling to high heaven again.

For now, this will be my “fill-me-up” toy until I find a silicone equivalent. I just won’t be turning it past the second vibration level, unless I want to scare my friends.

Get the Gyrating Massager at my sex toy store or on Amazon.