How does a sex toy reviewer decorate an office? 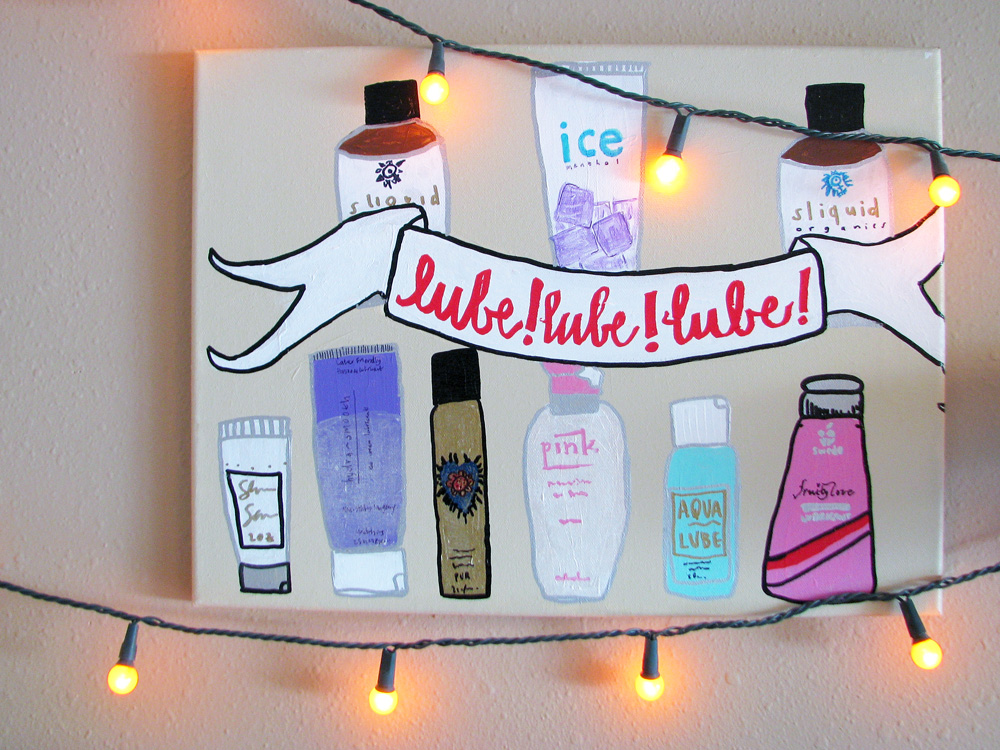 Some people dream of owning several cars or having a swimming pool. I dream of having a sex toy lair.

It’s weird, because my interest in decor usually consists of watching Design Star and going “huh, that looks cool… and like too much work.” But sex toys are my obsession, so I guess that is why this sounds fun to me.

BUT THEN SheVibe sent me a poster of some of their epic art1 and my wheels started spinning. I’ve always dreamed of having a real office, and imagining how I’d decorate it has made the thought even more enticing.

While scouring Etsy for ideas, I came across this amazing lube painting from the shop Sassy Girls Say Yes. Knowing it was one-of-a-kind, I just couldn’t wait until I had an actual office. And I’m glad I didn’t wait because it is GLORIOUS.

But a single (very awesome) lube painting just will not do. I must have more. So far, candidates include these embroidered vulvas and a print of this CLITORIS drawing from Melanie Jane.

My desk will be adorned with sex things too, for sure. I’d love to have some fists like Searah does, but I’ve heard they stink. I also need some sort of mug or holder for my pens. Anyone have a lead on an ironic Pipedream mug?

I have a lot of stickers — a Pure Wand one, many Tantus, one that says “clitoris is not a dirty word,” and the hilarious KEGEL ones I found at the doctor’s office — that need to be displayed properly, so maybe I’ll finally think of a way to do that.

Basically my goal will be to horrify anyone who enters, but horrify them in such a way that they would feel awkward expressing just how horrified they feel — because that would mean articulating a culturally-conditioned, unexamined shame about sex. Oh yes, it will be good. What do you think, peeps? Am I bursting with enough ideas? Anything I missed?