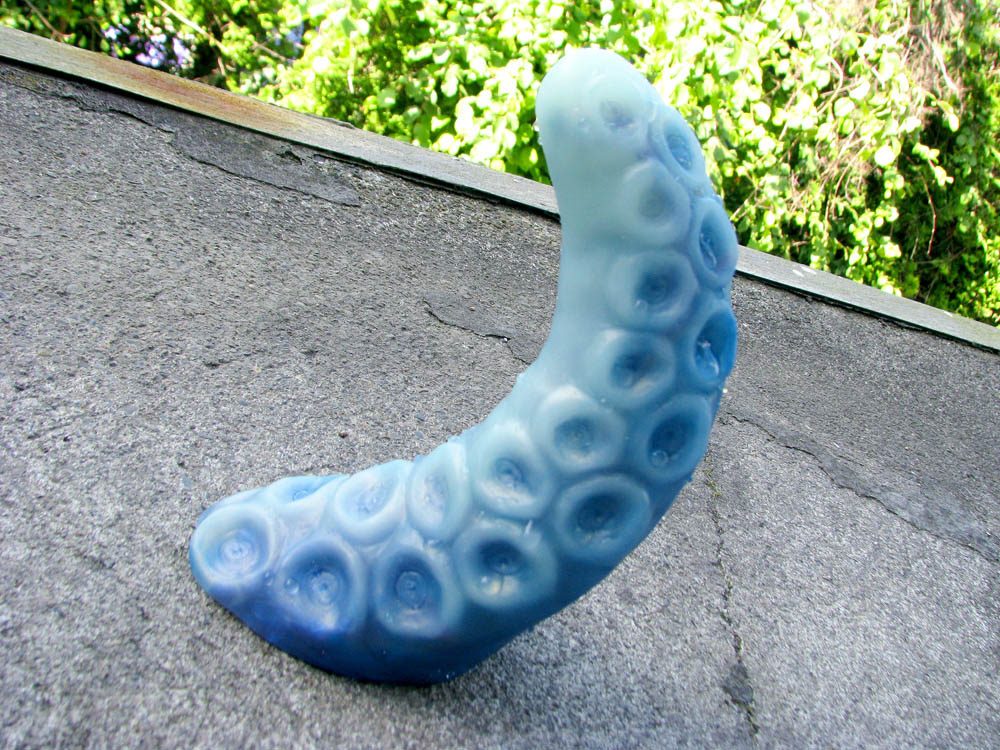 It appears that Maine-based Whipspider Rubberworks is dead. SheVibe tried to place a re-stock order with them last April, and haven’t heard from them since. Whipspider’s Etsy store is empty and they haven’t posted on Facebook or Twitter since March. I emailed them but have not heard back. It is looking grim. [Edit: their site is gone now, too.]

This is really upsetting because there is no other company quite like Whipspider. Their 100% silicone designs are colorful, whimsical, and incredibly detailed. You can tell that a lot of love goes into them — which makes sense, as they’re just a tiny 3-friend operation.

Whipspider made the gorgeous Jellyfish, which I love, the Tentacle, which I hate (my never-to-be-finished review consisted solely of these lines: “The Jellyfish works because liberties were taken with the subject animal to make the sex toy version compatible with the human body. The Tentacle, though, will fulfill only your fantasies of being teased mercilessly by a sea creature”), the Mantoy, which I’m indifferent about, and the Screw, which I like but haven’t used a ton.

They even made things that didn’t make much damn sense, like vibrating beetles and orchids. But that was Whipspider — they went out on a limb didn’t follow anybody’s rules.

SheVibe, to my knowledge, is the only online store that still carries Whipspider (other than Whipspider’s own site, which I have no experience with and which has an expired security certificate…), so if there’s one you’ve been wanting, you best be picking it up now. You can’t have the last Ghost because, uh, I bought it.

I hope that I’m wrong, and perhaps Whipspider will get a second wind like Jollies did. But I’m not counting on it. This much radio silence does not bode well.

It’s so sad to see such a wonderful, creative company joining the ranks of other fallen sex toy manufacturers such as Ophoria, Papaya Toys, Phallix, and Penetralia. I guess, when you’re around as long as I’ve been, this is destined to happen. But it still fucking sucks.