Shops that need support most during COVID: brick and mortars such as Early to Bed, She Bop, and Smitten Kitten! More info
Sex Toy ReviewsSlush pileVibrators
October 20, 2008 2 min read 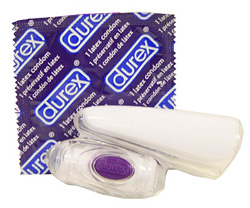 My boyfriend and I are big fans of Durex condoms. When we started having sex, we tried a few different types of condoms and he preferred those. Plus, they consistently garner high marks in tests and surveys. So the most exciting part of the Play Vibrations Focus was that it came with an Extra Sensitive condom.

I knew the moment I touched it to my clit that I wasn’t going to get off on that vibration. Even so, I forced my boyfriend to try it on for size. Unless he wanted to put his pinkie in the sheath, it did not fit his fingers. He could put them inside it, but only a little bit, which does not allow for much control. Considering I already take years to cum during sex, we tossed the vibe onto the nightstand and grabbed my Xtreme Pack G-spot Bullet (jeez, I should be banned from mentioning that toy in my reviews, but it always seems to pop up!).

As time went by, my frustration mounted. With any other toy, I would’ve turned it up to a stronger vibration level. Without that option, I could only fantasize about another toy (not mentioning names!).

The vibrator’s lifespan was 35 minutes. With the very low bar set at 20 minutes, I guess this was an accomplishment.

It seems clear to me that Durex is marketing this toy to people who don’t know any better, people who don’t know they could get a non-disposable finger vibe (and it would most likely have stronger vibrations, too). Good try, Durex, but you can’t fool me. Please, stick with making kick-ass condoms.

(As I was finishing up this review, I asked my boyfriend, “what are the pros of this?”