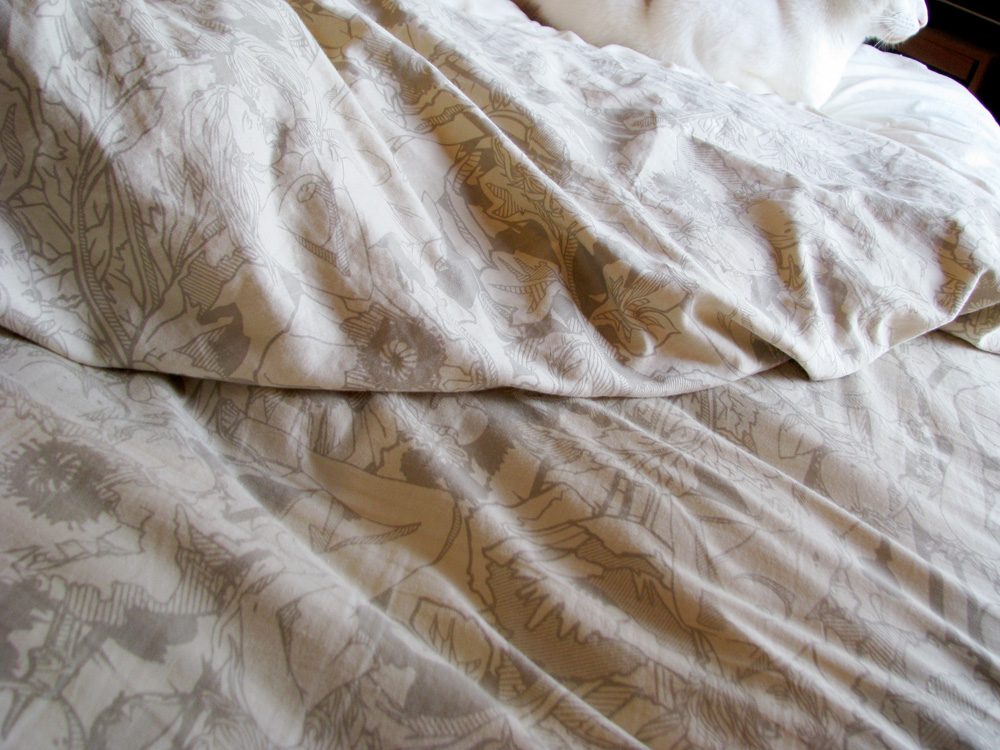 While I’m generally a pretty frugal person, there are a handful things in life I don’t like to skimp on: coffee, toilet paper, sex toys, and bed sheets. I’m no sheet connoisseur, but I’ve been known to become irrationally angry if I have to sleep in pilly sheets. That’s a step above my mom, at least.

The sheet set comes with one flat sheet, one fitted sheet, and two pillow cases. I got the taupe color. They also come in pink, which of course I actively shun. The sheets smelled like plastic out of the packaging, but the smell went away after I washed them.

Still, as has been made abundantly clear, I am not a lifestyle blogger (keeping a small patch of hardwood floor in tip-top shape for photographs is hard enough), meaning these sheets are probably the most fashionable thing in my  incredibly boring bedroom. Sorry, does that ruin your image of me as a chic sex kitten?1

I was hoping these sheets would be so comfortable I’d writhe all over them in ecstasy and run back to tell you they’re worth the price. But they’re not. In fact, upon first feel, they weren’t even very soft. Scratchy is too strong a word, but I was surprised by the texture. Now that they’re worn in, they’re definitely softer, but not lusciously so. Not $200 so.

This disturbs me because my Poppy Playground sheets have almost the exact same properties as my other sheet sets: 100% Egyptian cotton, 350-400 thread count, sateen finish. Those run $60, a price I’m happy to pay for sheets that are not total crap. But it’s quite a leap from $60 to $200.

And real talk: my other sheets feel softer. They have a sort of buttery feel that is lacking in the Poppy Playground sheets. Maybe the softness comes from a lot of tossing, turning, and washing — I don’t know. But the bare butt wants what the bare butt wants. And with the two sheets literally laid side by side on the bed (thorough product testing, yo), my bare butt wants the $60 sheets.

However, I don’t purport to know what kind of money goes into making these things, so I asked my contact at Vice Merchants for more info on the $200 price tag. He explained:

The thing about the 60 dollar sheets is they’re usually sold at Walmart or Bed Bath and Beyond, and those places have extreme buying power, also they’re almost always a solid color. We’re just a small, few person operation so obviously we can’t sell sheets at Walmart prices. We have a small team of designers doing a pretty damn good job to make these sheets happen. We also have to forge our own relationships with manufacturers abroad and store these babies in a warehouse (pay them a storage fee and shipping fee). Then there’s marketing costs etc. Oh, and as far as manufacturing, dye is not cheap!

I could go on and on about the pattern repeat on the Poppy Playground which is 27 inches of custom tailored illustrations (there are about 60 elements that went into that design) each labored over to ensure an extremely high print quality. We are talking hundreds of hours of effort just for the design.

I do not doubt the validity of these statements. Supporting small businesses is great. Supporting artists is great. $100 for these sheets I could understand — $40 extra for a sweet pattern and to support an indie manufacturer. But an increase of 233% for such things is more than the average person can justify.

See the sheets in action in my Bouncer review.