$400 should buy me the kind of sensation people wait all their lives for. The Eleven doesn’t do that. 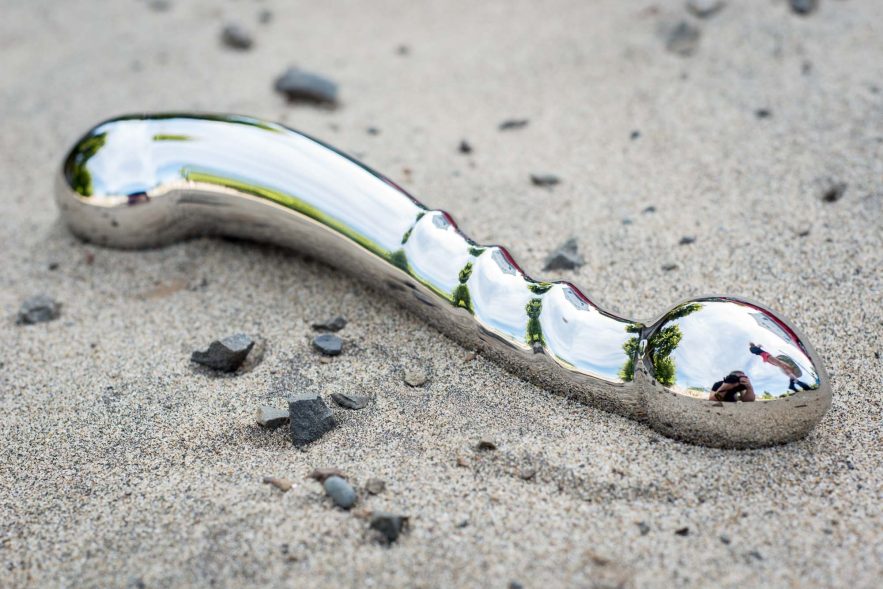 I don’t normally have sexual dreams, but I’ve had dreams about the njoy Eleven. They were always incredible jack-off sessions consisting of intense G-spot stimulation and unspeakable pleasure. At $400, the solid stainless steel Eleven is one of the most expensive sex toys ever made, and therefore should be the stuff of fantasies.

In my dreams, though, the Eleven didn’t weigh anything — and I sure as hell wasn’t wielding it myself. No, in my dreams it suspended itself for my pleasure, and all I had to do was grind down on it. I would wake up yearning intensely for the toy. I was certain I would love it. I mean love it. I’ve become a size queen lately, and the Eleven is practically made for people like me.

I was fully expecting to have to urge all of you to go spend $400 right about now. So I guess it’s sort-of a relief that I don’t have to do that, because the Eleven is a fine toy — but worth $400? No. It’s not.

Named for its 11 inches of stainless steel glory, the Eleven is also 2.75 pounds and girthy as hell. The smaller end is 1.75″ in diameter; the “holy fuck” end is 2″ in diameter. Um, yeah. No matter how big you think the Eleven is — it’s way bigger. I’d seen the Eleven in sex shops before I received my own, and I was still struck by the enormity of this toy.

Well, at first anyway. The creepiest thing is that now it doesn’t even look that big to me. I mean, I was able to use both ends of the Eleven the first time I played with it, so I’m clearly a mutant.

The sensation of the Eleven in use is surprisingly, and disappointingly, mundane. The toy just feels very heavy — not really like a specific shape, which is problematic for experiencing G-spot awesomeness. And, to my great dismay, clenching around either end does not produce ripples of G-spot pleasure. The G-spot stimulation is just… okay. Plus, I can barely feel those ridges that felt so amazing in my dreams.

Then there’s the thrusting issue. I can’t thrust the small end a ton because I have to hold onto the (VERY HEAVY) massive end. And when I insert the huge end, I can only thrust it back and forth about one inch, because it gets stuck in the small area past the pubic bone. If I were to squirt with this toy (which I haven’t been able to do), I wouldn’t be able to quickly push/pull it out like I can with softer/smaller toys, which could be dissatisfying. 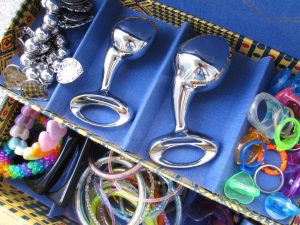 When I did try the Eleven with my boyfriend wielding it, I was faced with a familiar feeling: disappointment. While my hands were happy to be free from heavy stainless steel, my vagina was not responding any differently. Even with fast thrusting at just the right angle (which, holy fuck, took way too much time to find), I was perpetually stuck in a sort-of G-spot purgatory: definitely feeling the G-spot stimulation, but unable to squirt from it. Far more frustrated than pleased.

I realized that the Eleven was not going to be the stuff of dreams for me. I didn’t want to believe it, but it was true.

I continued to test the Eleven by myself, trying to pinpoint what wasn’t right. Here is what I realized: the Eleven’s angles are a problem. A big problem.  Because of its semi-S-shape, achieving the most G-spot stimulation would require me to push downward on the non-inserted part of the toy. I can’t hold a toy down like that. I can’t thrust and push it down at the same time. Hell, I can barely thrust in the first place.

I was able to achieve great G-spot stimulation once. My butt was propped up on my Liberator Wedge, and my back was against my bedrest pillow. Using the big end of the Eleven, I lapsed into the same blissful G-spot pleasure that the Pure Wand consistently provides. But it didn’t last, because thrusting with the Eleven made my hand hurt. Quickly.

If all I wanted was to be filled up, perhaps I’d be dying of joy over the Eleven. But I require G-spot stimulation. A lot of it. I expected it from the Eleven, and it failed me almost every time. At its very best, the Eleven is just a larger version of the Pure Wand. At its worst (which, unfortunately, is often), it is a pricey piece of stainless steel that feels nothing more than heavy.

$400 should buy me the kind of sensation people wait all their lives for. The Eleven doesn’t do that. It may be shiny and big and heavy and come with a black leather purse with a freakin’ handle on it that I can tote around like a complete badass… but it does not feel like $400.

So what is the Eleven for? I suppose to say you’ve conquered it. It’s not every day I get the chance to insert 2″ of stainless steel into my vagina. I’m glad to own the Eleven, but it’s a frustrating toy that looks far more amazing than it actually feels.

Get the Eleven at njoy, SheVibe, Early to Bed, Babeland, Pleasure Chest, Enby, Lovehoney (international), or Come as You Are (Canada).