A near carbon copy of the Magic Wand Rechargeable, only the Wonder ‘O’ Wand costs 4 cents more... and isn’t as good. 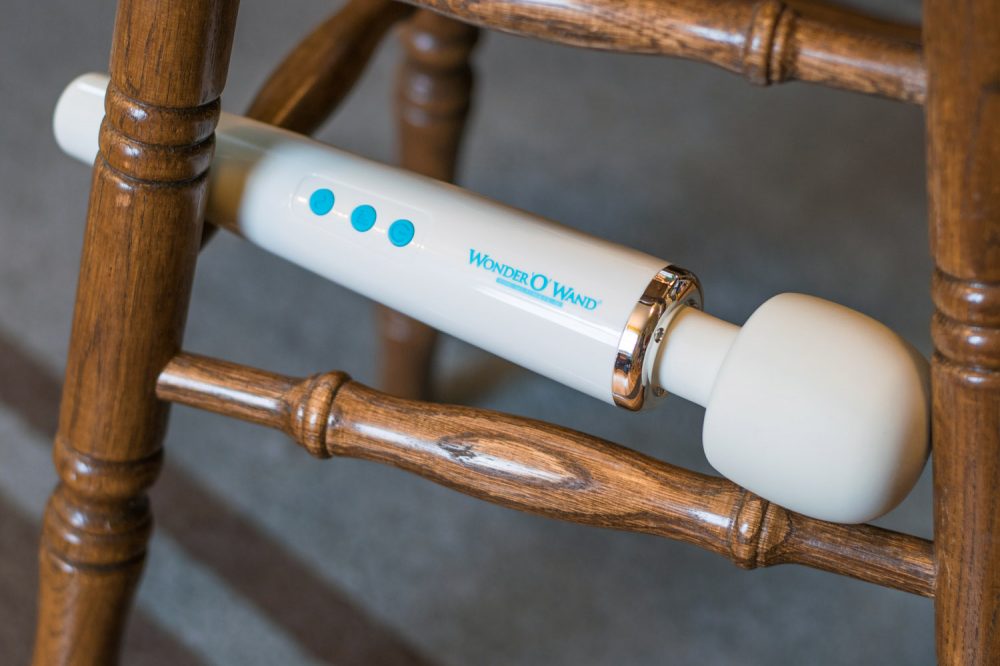 Say you’re in a sex toy megastore along the highway. You’re on a road trip, making a pit stop to get lunch — maybe chicken nuggets? — and decide to venture inside the local sex shop while you’re at it. After aimlessly taste-testing the flavored lubes, you find yourself in the wand section, fondling the myriad options. You’ve heard such good things about the Magic Wand Rechargeable, but what’s this? Several other very similar contenders? What’s a person to do?

The Wonder ‘O’ Wand (with unnecessary apostrophes because of course we must coyly hint at the word “orgasm”) is exclusive to Castle Megastore, and aesthetically, it’s a near carbon copy of the Magic Wand Rechargeable. They’re the same size and nearly the same weight; their buttons feature the same icons; they light up similarly; the setting options are exactly the same.1 These vibrators are creepily identical, except the Wonder ‘O’ Wand costs 4 cents more. Everybody wants to get some of that sweet sweet rechargeable wand money, I guess. Even if they’re selling the original right smack dab next to the knock-off.

In this scenario, should you buy the Magic Wand Rechargeable, the Wonder ‘O’ Wand, or be satisfied with your chicken nuggets and get back on the road?

There really is some magic about that toy — its bulky yet kinda sexy utilitarian look; the impressive vibration range and near-guaranteed orgasms; the way I rest it between my boobs after I come, smiling and clutching its heft. For god’s sake, my Magic Wand Rechargeable is marked with a bit of masking tape upon which the letter E is written. It is mine and you can have it when you pry it from between my cold, dead boobs. (Sorry, too morbid? I’ve been listening to a lot of My Favorite Murder lately.)

This wand felt like a challenge for my vulva. You say you’re so discerning, huh? Prove it. Explain this. Explain why both of these vibrators feel good but in distinct ways. Explain why this knock-off isn’t bad but the Magic Wand Rechargeable is better. Put those 10 years of sex toy experience to good use, now. Dust off that English degree. Use your words.

I can tell you that the first vibration setting on the Wonder ‘O’ Wand is so useless it may as well not exist. The entire toy jiggles as though it’s doing something, but my clit does not register it as pleasure. Throw this setting to the wolves. Goodbye.

The rest of the settings have another problem. I had to suss out exactly how to explain it, but ultimately the vibrations in the Wonder ‘O’ Wand feel… buried. Not a lot — enough of the vibration reaches the surface of the head that I can get off with it on any setting above the first — but more so than the vibrations of the Magic Wand Rechargeable. The MWR’s head has more movement on the surface, which translates into an upfront, immediately satisfying sensation.

With the Wonder ‘O’ Wand, I find myself gnashing the vibe more intensely into my vulva, yearning for more direct clitoral stimulation. An early indicator that this wand was not as effective as the MWR: during a routine mid-day 5-minute-or-less jack-off session with the Wonder ‘O’ Wand through my underwear, I found myself cycling all the way up to the highest setting. I don’t do that with my Magic Wand Rechargeable.

It’s not that the vibration is weaker, necessarily, or worse — in fact it feels quite rumbly. But it’s distributed poorly. And as I went back and forth, pressing one and then the other to my clit in quick succession, I could feel the difference. With the Wonder ‘O’ Wand, although my internal clitoris is pleased by the low-pitch vibrations, my external one is like, “where is stimulation tho?”

You could say one benefit of the buried vibrations is that the toy feels less abrasive on higher settings than the Magic Wand Rechargeable, and that statement would be true enough. But the Wonder ‘O’ Wand also makes a significant leap in vibration intensity between settings 1 and 2, and in doing so completely fails to include any good lower settings like the two on the MWR that I adore so much. This is important because most of the time I get off on the second setting of the MWR — it’s a big reason I prefer the MWR over the two-speed Hitachi Magic Wand Original — and I don’t want to skip over it.

An additional mark against the Wonder ‘O’ Wand is its battery life, although it seems silly to say that it “only” lasts 2 hours on high… but shit, man, the MWR lasts 4.5 hours. It’s a goddamn champ, above and beyond, in so many ways.

Without the MWR as a point of reference, without spending some quality time with both mashed against genitals, folks would not know the Wonder ‘O’ Wand is deficient at all. “Deficient” might even be too strong a word. But ultimately, at the end of the sex party, there are two features I love most about the Magic Wand Rechargeable: the delicious lower settings for stirring arousal, and the higher settings which place all the power front and center, on the surface, right against my clit, giving me all they’ve got. The Wonder ‘O’ Wand, despite its efforts of emulation, is missing both.

This review was sponsored by Castle Megastore.
But make no mistake: opinions are always & forever my own.