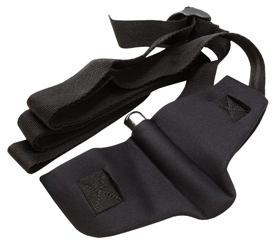 I don’t want to lead you on, so straight up: Ride the Vibe doesn’t work.

I know. It has a cool name. It sounds like it will turn you into an orgasm repairman. And kudos to Sportsheets for developing something seemingly innovative. But really, it just doesn’t work.

First: putting it on. There’s no buckle, so my boyfriend had to climb off the bed, step into the circle of the belt, and pull it up his body. He adjusted the waist by pulling at the strap. There was a lot of strap left over, which then dangled at his side like a weirdly-placed tail. Suffice to say, this could fit nearly any waist (altogether, I measured 74 inches of strap).

I asked him how it felt. He said, “fine.” He figured that summed it up, and I believe it did. It’s not a very complicated device.

The belt didn’t look especially weird on his body, and it wasn’t too obtrusive (if you are especially fond of the span of skin between the bellybutton and genitals, however, you will be blocked from accessing it). The fabric, neoprene, is softish, a bit stretchy, and fairly flat until you put the bullet in it. Not knowing anything about neoprene, I looked it up on Wikipedia and found out that it is commonly used to make laptop sleeves, wetsuits, and… fly fishing waders. It’s also supposed to be resistant to cold and flame. Glorious.

Finally: sexing it up. We tried missionary and cowgirl. Attempting to grind against the neoprene wasn’t as horrendous as I’d anticipated (the texture of the fabric isn’t abrasive), but it still… didn’t work. Anatomically, it just didn’t make sense. I couldn’t get my clit to rub against it. At all. Not even a little bit.

I guess it’s possible that since we don’t have crazily vigorous sex, I didn’t make a full effort to get my clit to come in contact with the bullet, but I really don’t know if that would change anything. Also, nothing keeps the bullet in place, so it could easily be dislodged by a fervent thrust.

And, knowing my body, I would not be able to get off on that vibration even if I did find a way to hump it. Unfortunately, none of my other bullets are small enough to fit in the pouch. Not that that would really help matters, though.

So, the vibrating sex belt is a bust. I hate to say it, but even cock rings work better. At least (some of) those touch my clit. This thing is just a harebrained idea that probably should not have made it to manufacturing in the first place.