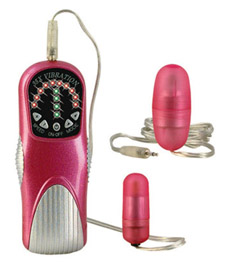 I’ve been curious for a while now about the Xtreme Kit. I am unabashed in my creepy allegiance to the Xtreme Pack G-spot bullet, but I always wondered if the Xtreme Kit was just as good. No, the bullet shapes aren’t the same, and I figured the Xtreme Pack would still win in that area, but there are certain advantages to different-shaped bullets. Plus, I wanted another battery pack in case my G-spot bullet ever dared quit on me.

It seems fitting to compare the two toys side by side, so here goes — my first comparison review!

The bullets aren’t quite the same, either. The bullets of the Xtreme Kit are translucent, showing the innards of the bullets, while the Xtreme Pack’s bullet is opaque. All the bullets have the rubber cote texture to them, and each bullet has a seam that traps gunk if you don’t watch out. I was surprised to find that the Xtreme Kit’s bullets had little black o-rings where the cord connected to each bullet. “Why doesn’t my Xtreme Pack have that?!” I whined — that is one thing I’ve always wished it had, although after over a year of heavy use and sometimes careless cleaning, it has never burnt out on me.

The cords are the same length (2.5 feet). I know you were wondering. All of them can be unplugged from their battery packs. The Xtreme Kit, contrary to what you would think, only has one input, not two, so choose your bullet wisely.

The exact same. And that’s fine with me. There are five levels of constant vibration controlled by the buttons on the left side of the controller, and five vibration patterns controlled by the buttons on the right. The patterns can be slowed down or sped up with the left side “speed” buttons, hence the “35x vibration” that the packages promise. I enjoy the patterns, but please, don’t ask me to describe them. Too difficult.

All the functions are accompanied by exciting lights. The vibration patterns have light sequences that correspond with the vibrations. I’m a sucker for the lights.

I am not a fan of the Xtreme Kit’s large, eggy bullet. It jumps around between my fingers when I try to use it, and it doesn’t provide anything close to the pinpoint stimulation the Xtreme Pack offers. The Xtreme Kit’s tiny bullet also tries to escape when I use it, but I can remedy that by grasping the cord right where it meets the bullet.

This bullet could also replace similarly-sized bullets in cock rings. I highly suggest this if your cock ring’s bullet takes watch batteries (the bane of my existence, if you couldn’t tell).

I’ve also found the tiny bullet feels quite nice tucked between my labia, against my clit, inside my underwear. It fits there very well, and doesn’t dislodge itself when I walk. I’m very much enjoying this technique.

My mind hasn’t been changed. The Xtreme Pack is still the love of my life. However, there are some definite advantages to the Xtreme Kit in certain situations, so I definitely recommend it for its tiny bullet.