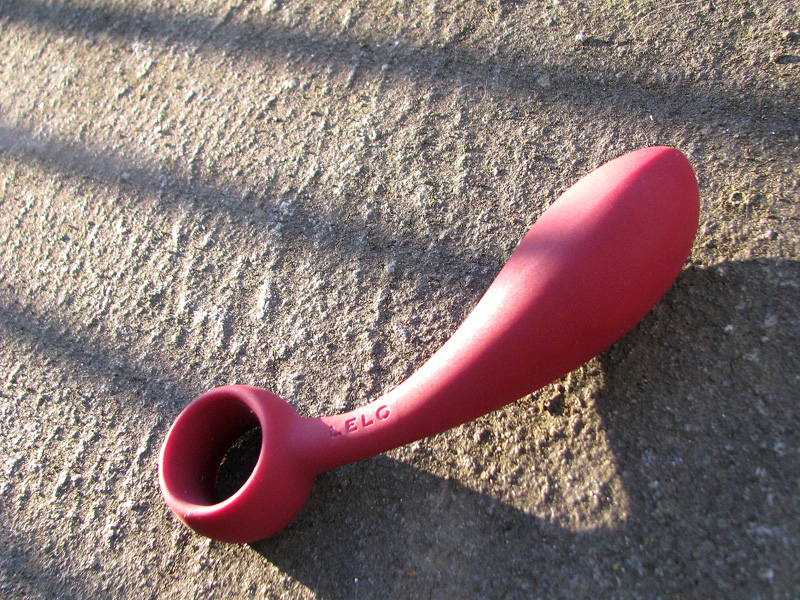 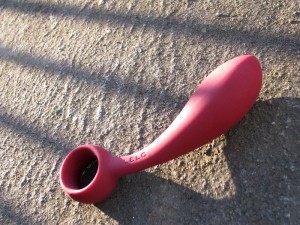 I’m going to resist the urge to refer to the LELO Bob as though it were male. It is going to be difficult, since… it’s named Bob. But the name Bob makes me think I am shoving Bob Saget, modern-day Bob Dylan, or worst of all, Bob Barker, up my ass (gives a whole new meaning to “come on down!”). No — I am shoving a beautiful pleasure object up my ass. In fact, I’m not even shoving it, but I’ll come back to that.

It wouldn’t be right to write about a LELO product without swooning over the packaging, even if it feels nearly commonplace to me now. The Bob comes in a heavy-duty black storage box, along with a one-year warranty and a white satin drawstring bag. Out of the package, Bob had a faint smell if sniffed up close, similar to the smell of a Sharpie, but some soap and water took care of that. My Bob is a deep blood red color, with some barely noticeable impurities that make the 100% silicone appear to have a few very slightly darker splotches.

The silicone that Bob is made of is surprisingly stiff. It has absolutely no give to it, and only bends where the shaft meets the handle. The rest is as hard as plastic, or even glass. Although this surprised me quite a bit, it makes sense — the harder the material, the more noticeable it will be in the butt.

And noticeable it is. Though getting a grip is a bit challenging, Bob slides in very smoothly, and can be felt immediately. The elegant shape of the plug makes for a delightful, and completely comfortable, sensation. It feels just enough like a foreign object, and just enough like it completely belongs in the butt. I apologize for my non-specific descriptions of butt plug sensations, but trust me, this is a very lovely one. It isn’t too intense, so it could be worn for long periods of time without becoming annoying. It also feels excellent moving in and out.

I do have one fear, though. The loop base really isn’t very large. To give you an idea: my thumb fits snugly through the loop (I enjoy spinning it around my finger, in fact). I may just be irrationally afraid of butt plugs getting sucked into my ass, but it is worth noting that when Bob is in my ass, it is a little too easy for me to push the base in. It doesn’t slide right in or anything, but it definitely responds to a push. I now become paranoid whenever I sit down with Bob in, though nothing so far has indicated that sitting on it will pop it in. I personally would not wear this plug during rough sex, though.

Another issue: the placement of the word LELO. It really should have been branded in the handle. Instead, it’s on the tail-end of the shaft. Mine traps lube, which then dries there. If lube can get trapped, I have to wonder if bacteria could as well. For that reason, I won’t be sharing this plug without a condom, if ever (I’d really like to introduce my boyfriend to it, since it’s so comfortable, but I know that’s a long way off right now).

Bob is close to perfect, but it is not as perfect as other LELO toys (especially my lover, Ella) tend to be. Its shape is absolutely divine, and I’ve heard it’s especially excellent for prostate stimulation. It is small enough for a beginner, but stiff enough for a non-beginner. It is a snap to clean and sterilize, being 100% silicone. I just worry about the not-large base and the trapped lube issue.

Get the LELO Bob at one of my fave shops:
Babeland, Pleasure Chest or Lovehoney (international).