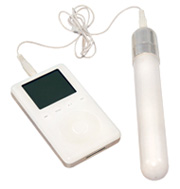 I knew the OhMiBod was a shoddy piece of crap from the get-go. I just didn’t have quite enough justification to state that blatantly in this review… until last night when it died. After about 1.5 uses, and right after I finished compiling a 33-song playlist of songs to test, it stopped working.

I was surprised at how chintzy the OhMiBod was. It may look classy in pictures, but one glance at the cheapo silver caps and you’ll change your mind. Also, you have to bang the thing against a hard surface to even get the plastic battery sleeve out. Then, in the manual, the total hard-on killer: “Do not use rechargeable batteries.” Dude, you don’t get to cost $70 and then say that.

To gauge whether or not the OhMiBod will respond to a particular song, you must understand just how particular this little brat is. To say that it responds to a nice beat would be incorrect — what it really does is respond to a strong beat if there is not much else going on in the song. For instance,  “Bonnie Taylor Shakedown (2K4)” by Hellogoodbye may have a killer beat, but there’s too much going on for the OhMiBod to respond to it. It becomes just a constant buzz.

Here are a few songs that the OhMiBod responded positively to before it died: “Guitar Hero” by Amanda Palmer, “The Beautiful People” by Marilyn Manson, “Miss Magnolia” by Matt Costa, “Music is my Hot, Hot Sex” by Cansei de Ser Sexy. However, even in songs like these, the OhMiBod tends to flake out when the chorus comes along, unable to distinguish the beat from everything else.

I wanted to try Blink 182, Eve 6, Nirvana, Simon & Garfunkel, and the all-important “Drops of Jupiter,” but it died before I could.

Thankfully, OhMiBod has come out with better toys. Now there’s the
Freestyle, Freestyle G, and Freestyle W. I’d suggest one of those instead.