Shops that need support most during COVID: brick and mortars such as Early to Bed, She Bop, and Smitten Kitten! More info
Penis ToysSex Toy ReviewsSlush pile
July 20, 2009 19 2 min read 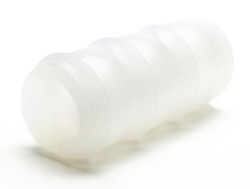 But my hope didn’t last long. When I noticed the Stroker sitting in the bathroom a couple mornings after I presented it to my boyfriend (the telltale sign that it was used and washed), I asked him, “how was it!?”

Without hesitation, he replied, “it sucked.”

Talk about deflated. It sucked is a strong statement, but I know that my boyfriend doesn’t use it lightly. I quickly asked him the requisite, “well, how much lube did you use?”

Later, when I used the Stroker on him, I realized just how dire the situation was. I felt like I was hurting him just by stroking. The ribs moved haphazardly over his cock, causing far too much friction, no matter how much lube we added. I tried holding the top closed to create suction, but to no avail. Seeing my boyfriend’s visible disinterest about something being moved up and down his cock told me everything I needed to know.

Silicone is easy to clean and sterilize, and this sleeve can be turned inside-out for thorough cleaning. The silicone Tantus used for this sleeve is actually softer than their usual silicone, and it is very squishy. But the ribs inside are still too damn intense, and the lack of a closed end is enough to turn most dudes away anyway. It’s worth mentioning that this sleeve is also quite short, at only 4 3/4″ long, so it could prove even more awkward to use on longer cocks.