Review: Turn Me On Vibrating Panties 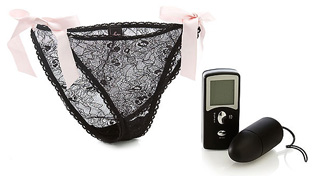 I made a huge one when I saw the Booty Parlor Turn Me On Vibrating Panties (is your brain fried from the ugh-factor yet?) and assumed that, via my super magical sex toy sensing abilities, I just knew what size the bullet was. No, there weren’t dimensions, and back then there wasn’t a full picture of the bullet… but I was certain that the bullet had to be small. Really small. Because it has to tuck into panties, for god’s sake.

Well, I was wrong, because apparently it’s all the rage to tuck 3″ long, 1.25″ diameter bullets into your panties for a night on the town.

And, just my luck, the remote control and bullet are almost identical to the those of the Bnaughty Unleashed. Little aesthetic differences make this set look cheaper than the Bnaughty’s (the finish is straight-up smooth plastic rather than velvety), and the back of the Bnaughty’s remote reads 433MHz whereas the panties remote reads 315MHz, but that’s it. They take the same batteries — three N batteries in the bullet, one 23A battery in the remote — and have the same exact functions (three constant vibration settings followed by 7 patterns).

I was excited, for a second, about the panties that come with this. You get to actually choose a size, which is far better than one size fits most skinny people/models/roughly 5 people on earth. I chose XL, which is for sizes 12-16. Granted, I’m on the bigger end of that range, but this underwear is just so skimpy, thin, and cheap. I guess it’s hot if you want your rump hanging out all over the place, but I don’t.

Also, do you understand how ridiculous it is to tie yourself into your own underwear? It sounded cool in my head (ooh, adjustable ties!), but then I realized what it would actually entail — underwear that functions like a diaper.

…And yes, I do recommend lying down to put them on. Standing up is just asking for humiliating trouble. Trust me.

So okay, it vibrates. My genitals are down there. It feels a’ight. But the bullet doesn’t sit against my clit  (it slides down in the pocket — sounds familiar, huh?), and it’s bulky as hell.

I gave the remote to my boyfriend to test the range of this thing. We started at opposite ends of the apartment; nothing was happening. He crept closer; still nothing. When he was in the same room as me, facing me, a couple feet away, the bullet finally responded. Then I went to use the bullet by myself while watching My First Place on Hulu. Sitting at my desk, holding the remote in my hand, the bullet did not respond. I had to point the remote DIRECTLY AT MY CROTCH to get a response.

So if you plan to go out to dinner with your partner, sit directly across from hir, and point the remote straight at hir crotch under the table, this toy would be perfect for you!

And a tip for the bullet-wearer: don’t stand up and walk around while using this bullet, unless you want to feel as though you have pooped, and now your undies are sagging with the weight.

…Yep, poop and diapers all in one review.

I think you can understand why using this toy put me in a bad mood. Sure, the couple had found their first house, and it had a sweet stainless steel fridge just like they wanted, but I was stuck with a large, non-responsive bullet sagging in my underwear — err, panties — and I felt like the biggest tool of the century.