Shops that need support most during COVID: brick and mortars such as Early to Bed, She Bop, and Smitten Kitten! More info
Sex Toy ReviewsVibrators
July 31, 2008 3 min read 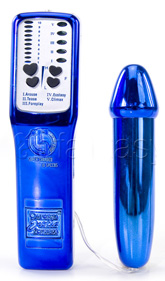 I know packaging doesn’t matter, but sometimes I just can’t ignore the hilarity of it. Check out this piece of advertising genius, from the front of the package of Tera Patrick’s Super Charged Magnum: Tera Patrick is wearing a blindingly blue metallic dress to match the toy, and holding a black and white checkered flag (get it, because this thing is just so power-packed?).

I’m not surprised. This is the sort of packaging I’ve come to expect from California Exotic — somewhat sleazy, usually tacky, and littered with promises in intense fonts. I mean seriously, the words “Super Charged” are in a nu-metal band font with fire rising from them.

So alright, I’ve been reeled in. Now that I know the vibration patterns are “high octane,” I’m raring to go.

But first, you must understand that I’ve been hopelessly in love with my Xtreme Pack G-spot Bullet for months now. Could any bullet top that one? Well, the magnum boasts ten speeds and five vibration patterns — the G-spot bullet only has five speeds. The magnum also takes four AAAs, and that usually equals power.

The appearance of the magnum, I must admit, doesn’t exactly get me in the mood. Shiny finish just screams “cheap!” to me, and as I suspected, it wears off. There is already a little spot that is silvery.

Two things about the battery pack are cute: first, the buttons are hearts. Second, the modes are listed by roman numerals (being an English major, I like to utilize roman numerals whenever possible to make myself look sophisticated). But cuteness is different from functionality. I found the long length of the pack awkward, the buttons difficult to push, and the lights tricky to interpret from many angles. I really have to hold the pack up toward my eyes to know which level I’m on, and even then, the lights are not precise. When I turn the toy on, for instance, the vibration level light seems to correspond with level number two.

I do applaud the fact that this bullet plugs into a jack on the battery pack. It makes for much easier cleaning of the bullet. A very small (but appreciated) detail is that the place where the cord connects to the bullet is surrounded by a ring, so it makes me even less nervous to clean it with water.

Now, the bullet itself. I’m not too hot on toys that try to be penises, but I understand what this one is trying to do. This is one of the longest, biggest bullets I’ve seen, and I believe it is intended to be both a clitoral stimulator and an insertable shaft. The “head” does provide a bit of extra stimulation when inserted, and the length is quite impressive for a bullet.

Being made of plastic, this toy transmits vibration very well. The first couple of vibration levels are… how do I say this? — useless. But the rest of the levels progress nicely and end with a quite strong (and loud) tenth level. I would estimate that the magnum’s seventh level is equal to the G-spot bullet’s highest level, in intensity.

Since euphemisms like “tease” and “ecstasy” don’t exactly tell you much, here’s my interpretation of the five available vibration patterns: I. steady vibration, II. escalation, III. pulsation, IV. faster pulsation, V. escalating and de-escalating pulsation. All of the vibration patterns (with the exception of II., which seems stuck at the highest level) can be adjusted in intensity. Sadly, one of the patterns that I really enjoy from my G-spot bullet (steady vibration followed by pulsation) is absent.

Seeing as both the Xtreme pack G-spot bullet and Tera Patrick’s super charged magnum both have adapters that plug into their battery packs, I couldn’t help but wonder if the bullets could be interchangeable. Consequently, being the nerd that I am, one of the first things I did was plug the G-spot bullet into the magnum’s battery pack. Voila! It worked like a dream.

I really need to come up with a nickname for the G-spot bullet. I have a feeling I’m going to be comparing it to a lot of other toys in the future.