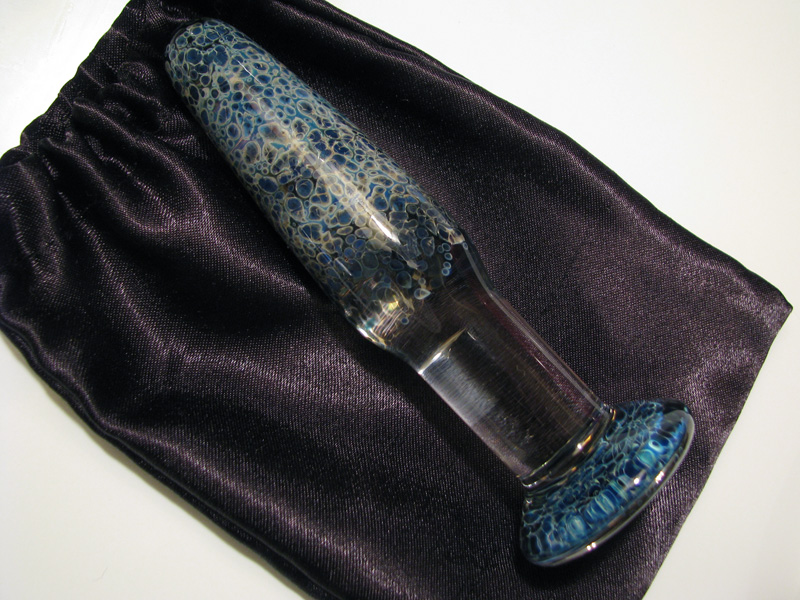 [This toy is no longer being made, but the Spartacus Blown Spade and Icicles No. 26
are similar and probably would actually stay in someone’s ass.] 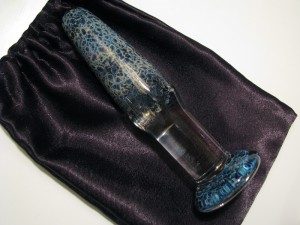 I’ve been longing to try a glass butt plug for a while now. Which is not to say I’m a butt plug connoisseur. Not at all. In fact, I only own a few of them. But that does not mean that I have low standards. I know when a butt plug just doesn’t cut it, and sadly, this one doesn’t cut it. It may hold temperatures well and be completely sterilizable, but it won’t stay in my ass.

The Deck the Halls butt plug by Erotica Glass is a very interesting and peculiar-looking butt plug. Its dotted pattern reminds me of mold. I find myself slightly repulsed by it at times, yet I still marvel at its intricacies. The creators of this plug certainly did something unique here, and I can definitely appreciate that. The plug came with a black satin drawstring pouch and a hot pink card featuring care instructions. The pouch is thin and not good for glass, but the care instructions card was worthwhile and covered its bases well.

I had no trouble sliding this toy in my ass, as it is very thin. The glass felt great and noticeable — that is, until I dared let go of the plug. Now, correct me if I’m wrong, but I believe the term “butt plug” exists to denote items that are meant to, um, plug up butts. Which is why I’m taking this plug’s inability to plug so seriously. What am I supposed to do, kneel over and fuck my ass with it? (Okay, I did try that, and it was decent, but why do that when I can fuck myself with something like the Tantus Ripple?). Seriously, people. Even when I clenched it, it would slide out. Right away. Not only is it annoying, but it’s kinda dangerous.

It’s possible to keep this plug in — by sitting on it. And the base isn’t horribly uncomfortable in that position. However, be prepared to deal with a strange, unsettled type of feeling, as the plug doesn’t really even stay in that way. And, obviously, you have to sit still and you can’t just get up if you suddenly need to make popcorn or clean the litterbox. Nope, you have to reach around and either hold the butt plug’s base or pull the whole thing out.

I think that a bigger version of this butt plug might not have the same slippage issues. But I only have this version to judge. So Deck the Halls butt plug, I hereby christen you “the butt plug that won’t stay in my ass long enough for me to adequately review it.”