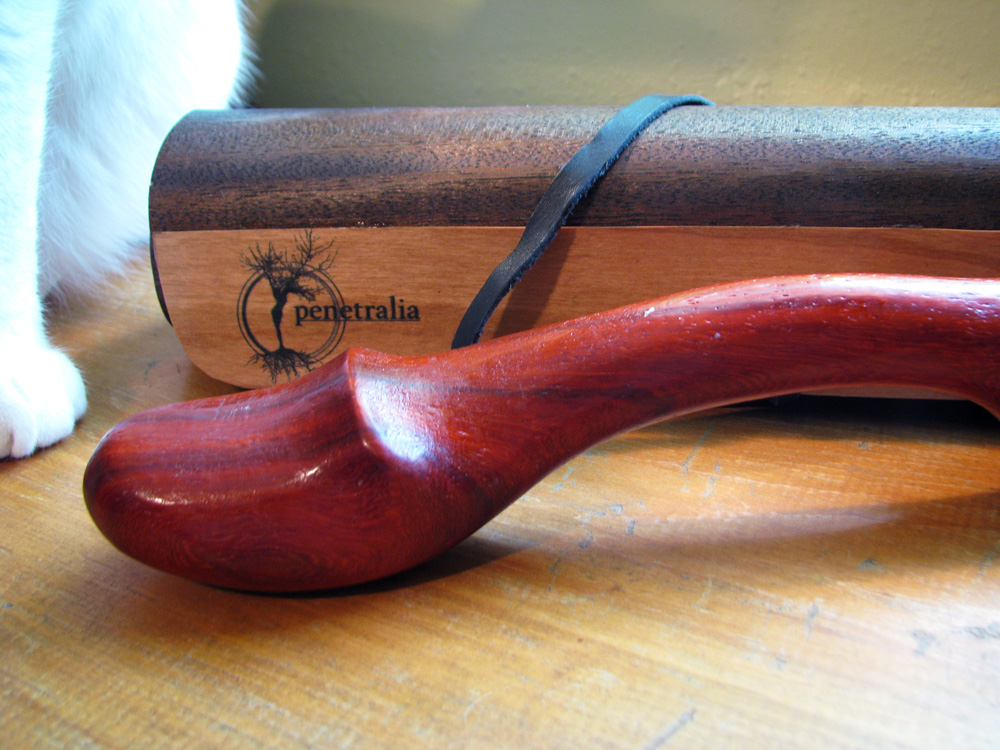 The Penetralia Number 66 blew my mind, so standards were high coming into this one. Like the 66, the 23 comes in an epic wooden tube that ties shut with a piece of leather. Unlike the Number 66, the Number 23’s edges are rounded and nicely curved, although you can tell the shape is slightly imperfect. The coating also isn’t as thick as on a NobEssence piece, but I’m told that has been altered due to my previous review (ENACT CHANGE, Y’ALL).

The Number 23’s best end is its simple bulbed one. As bulbs tend to be, it is a good G-spotter. But the ridged end suffers from a syndrome that I encounter all too often: because of the shape, it forces me to push down on the non-inserted part in order to truly enjoy the inserted part. So when I use the ridged end, I have to scootch to edge of my desk chair and slump backward to get the job done. Not good for my posture, I would think. Plus I just like sitting up straight when I masturbate. Which is weird maybe, but anyway…

I feel like I could take advantage of that interesting ridge if I could thrust or rock the toy, but I can’t, because of the aforementioned issue and also because the toy likes to lodge itself behind my pubic bone. Both ends do that. It’s a very… stationary toy.

I also think, for a company that’s so new and toys that are a bit less than refined, $110 is too much to ask. For $110, I would like my toy to be perfectly symmetrical (I am more lenient with my human beings, but that’s because I don’t have to pay for them). I gave the Number 66 a pass on this, but I guess I was a bit blinded by my love for its sensations.

I look forward to what Penetralia does next, anyway, as everyone needs more wood in their orifices. Fair warning, though: if you guys keep giving things numbered names, I’m going to continue to find stupid / potentially unfair ways to make fun of them.

Penetralia has gone the way of the dinosaur, but there are still amazing wooden toys
made by NobEssence. Read my reviews and then browse their line at SheVibe.