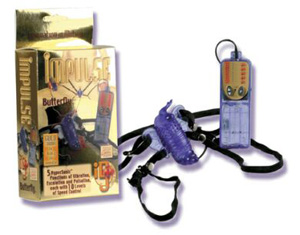 I decided I would give strap-on vibes one chance to wow me, and that chance came in the form of the Impulse Butterfly. It has garnered decent reviews, and is made of TPR (thermoplastic rubber). It looks really stupid, but there’s not much we can do about that — it’s like a rule that all strap-on vibes come in ridiculous shapes. This one happens to be a butterfly, and the most unattractive butterfly I’ve ever seen. It’s like an inversion of a real butterfly — tiny wings, massive (ugly) body. The straps are attached to the TPR of the wings, which doesn’t look good for the long term (not that I’m ever going to find out).

California Exotic did not deem it necessary to include actual instructions for how to put on this thing, and I wasn’t surprised. I used the picture of the woman in a spacesuit on the front of the box as a guide. I determined that there were three loops that needed to go around me: one around my waist, and one around each leg. Just putting this toy on is a real hoot, especially with my horrible sense of balance. It didn’t look exactly like it did on the spacesuit woman, but it was close enough.

And something else ensued too: embarrassment. I am not easily embarrassed when it comes to sex toys, but this one is just demeaning. It says, “hi, I’m a purple gooey butterfly haphazardly strapped around your body. Yes, it has come to this.” Seriously, who wants to be struggling to put this on, especially in front of anyone, especially prior to sex?

But I did it, and I suffered through a few minutes of sex while wearing the Impulse Butterfly. The straps were comfortable enough, but the butterfly continued to pull at my pubic hair and did not even remotely touch my clit unless I pressed on it. The vibrations are fine (the battery pack runs on 3 AAs), but as far as I’m concerned, they don’t matter. What matters is, this toy makes everything it touches 100x more awkward. And it got in the way during missionary.

This is an epic fail of a toy if I ever saw one. By the end of my jaunt with the Impulse Butterfly, the straps were inexorably twisted. Then I had to clean the damn thing, which is really annoying with the straps hanging out everywhere. I see no reason anyone should ever buy this toy, or any other strap-on vibe for that matter. Seriously, they just make you feel like a mega loser.