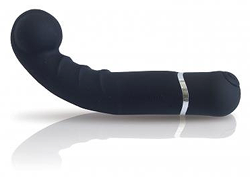 The Beyond 1 is generally the same size and shape as the Beyond 3, just with no looped handle. It’s a little over 7″ long, and the ball at the end is 1 1/2″ in diameter. The ball end is pliable, but the shaft is not. The whole thing is made of 100% silicone, very soft and matte, except for the cap, which is silky plastic. The color of the Beyond 1 is blacker than the Beyond 3 (hence the difference between the colors “noir” and “charcoal” — obviously, guys). The cap twists off easily to reveal the battery compartment, which holds two AAAs (included!). The one and only button on the entire unit is on the cap.

The packaging is quite classy — a nice (albeit cardboard) box, a one-year warranty, a helpful manual, and an envelope-shaped storage pouch. These touches reflect the toy’s very steep price tag of around $80, although that price is never completely justified by anything.1

The Beyond 1 has 900 vibration modes — okay, 9, but it feels like 900 when I’m cycling through them one by one. The manual explains them in pictures and cute names like “Mambo” and “Spellbound.” There are three constant vibration modes, and the rest are patterns.

The Beyond 1 claims, as is common nowadays, to be “whisper quiet,” which wouldn’t be so bad if this toy could at all be described as quiet. But it can’t. It is loud, even on its lowest level. The vibrations are definitely strong, but they’re not concentrated in the ball-shaped head, so clitoral stimulation is a no-go.

Now, you see, I don’t care for internal vibrations (I haven’t reviewed a vibrating insertable since August!), so I’m already biased against the Beyond 1. But the vibration isn’t the main issue, here — the lack of handle is. When I thrust with the Beyond 1, I have nothing to grasp. I can’t get a good, quick rhythm going at all. Therefore, I can’t stimulate my G-spot the way I like to stimulate it.

But, of course, thrusting is not mandatory, and once I let go of the idea that the Beyond 1 needed to be thrusted to be enjoyed, things went more smoothly. I kept the Beyond 1 stationary inside me, letting the vibrations stimulate my G-spot instead. I was pleased, especially with the constant vibration modes. Not in orgasmic heaven, but pleased.

[Ophoria as a company is now gone. You might be interested in the Jopen Key Comet II Wand.]