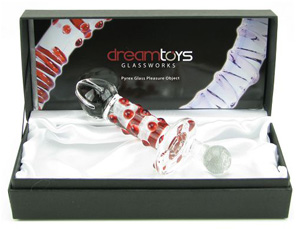 Everything I said in my Lemon Drops review about the Dream Toys company still applies: their toys are reasonably priced (at $40, the Raspberry Chunk is pretty cheap for a toy of its kind), each toy comes in a nice black box lined with white satin, and the company offers a “Lifetime Replacement Warranty” should you damage your toy in any way. This is all very nice.

My main beef with the Lemon Drops was its five-inch handle. For solo use, it was basically impossible to use the handle for spinning purposes. I had to try the Raspberry Chunk because its handle is much, much shorter. Unfortunately, the handle yet again did not turn my crank (har, har). The handle did not make my dildo-twisting life any easier. It was easier than with the Lemon Drops, but still no better than good, old-fashioned twisting.

Now, if you happen to have a juicing fetish, you are in luck. I mean, who doesn’t want to imagine that a vagina is a lemon that you must… make lemonade… from?