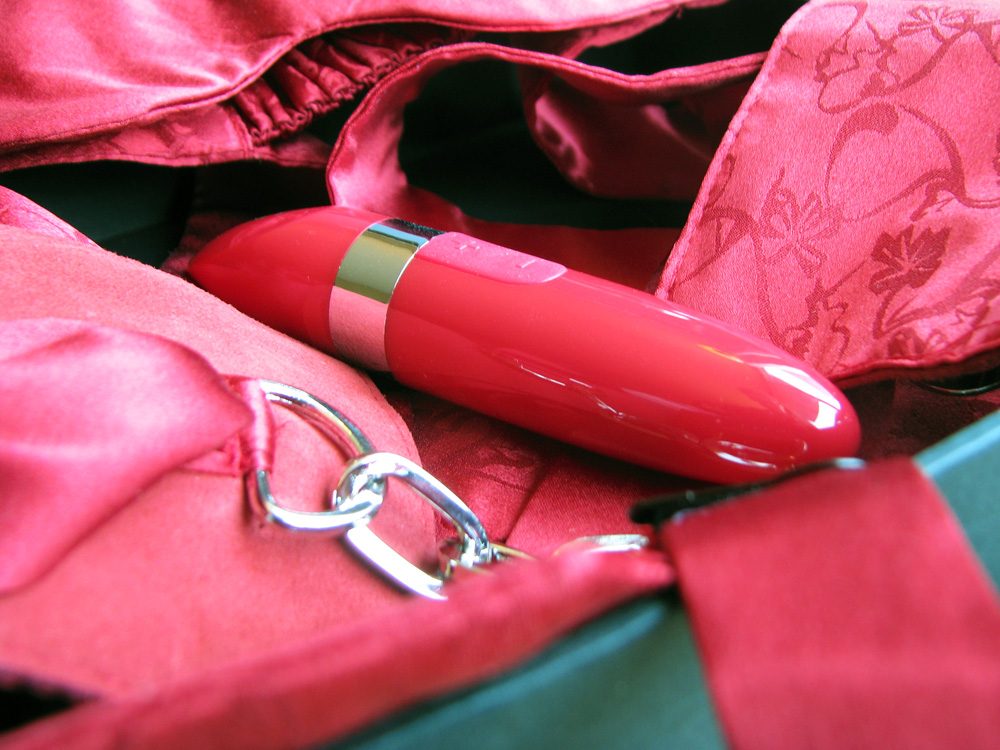 The LELO Mia and I go way back. Almost to the beginning of this blog. A lot of things have changed since then — for instance, I am now a hardcore Google Chrome fan, and the clunky Compaq laptop pictured in my original Mia review has been replaced by a sleek white Sony Vaio1. With the times, Mia has evolved as well.

But “second generation” is a confusing thing to say, since technically Mia is in its third generation. I tried the original back in 2008, then another version in early 2011, when the toy was updated with a new (and quite pleasing) motor. The LELO Mia has now set a new record for me — it is the first toy I have reviewed three times. Thrice, y’all.

I cannot tell you how much I wanted this new Mia to be a big step forward, a triumph. A lot. Very much. I always recommend the Mia to people new to sex toys because it’s compact, easy to use, USB rechargeable, and luxurious enough to get them hooked. I wouldn’t exactly call it a “must have” toy, but I was hoping, with this version, I’d be able to place it more firmly in that category.

Instead, the Mia 2 is a bit of a let-down. Not because of its performance — it’s still as great as ever — but because of the way LELO has marketed it.

See, when they updated Mia in February of 2011, they boasted that it had “double the power of the previous Mia.” I found this to be true, hence my ensuing glee. Now it’s déjà vu — in press releases for the Mia 2, they claim it has “100% more power.” What they don’t tell you (but that I have confirmed with LELO) is that this claim is in reference to the first Mia, not the updated one — let’s call it Mia 1.5 — that has been in circulation for two years now.

And so, the Mia 2 has no perceptible boost in power from the Mia 1.5. I literally could not make out a power difference — because there isn’t one. I am trying not to throw too much of a tantrum, but damnit, I really wanted double the power.

Ultimately, there are only three actual differences between Mia 1.5 and the Mia 2. Mia 2 is now waterproof and has six vibration patterns rather than three (including a few weirder patterns, which is good), and the way the caps attach has changed (probably for the better).

My Mia 2 is a special edition red one, and comes only in LELO’s $189 Adore Me Pleasure Set, graciously sent to me as a surprise from LELO. The set also includes a red Intima Silk Blindfold and red Sutra Chainlink Cuffs. LELO also has the Indulge Me Pleasure Set (purple) and Dare Me Pleasure Set (black), with various other toy and bondage selections.

The blindfold and cuffs are both made with high-quality materials such as silk, suede, and metal, with a subtle flower pattern on them. Although the blindfold doubles as a great headpiece if you want a quick and dirty way to dress up as Lisa from The Room, it’s bordering on too tight on my small head, and on my boyfriend’s head, it presses into his eyeballs and he will not tolerate it for more than five seconds. I feel like only kind of person who would actually require tightening with the straps would be a child.

The blindfold and cuffs are severely — I mean severely — overpriced for what they are. Yes, they are cheaper in the set (you save $64), but separately the Intima Silk Blindfold is $69 and the Sutra Chainlink Cuffs are $99. You can get hardcore leather handcuffs for less than that. Or bamboo, silk, cotton, or hemp rope. Or $9 bondage tape. Or you could use a tie, scarf, piece of ribbon, or bit of rope from around the house. Pick up a sleeping mask and call it a day.

The Mia 2 is the only worthwhile piece of the set. Still, even without the expected power boost, it is a good, solid toy. It’s small but not too small; easy to hold and easy to clean; fairly quiet. It’s still not super strong, but it does the trick when I travel, or when I need to duck into the bedroom for a wank while my boyfriend records bad singer-songwriters. Mia’s biggest asset remains its portability, its self-contained nature, and the fact that whenever I dig it out, it still has its charge.

But if you’re wanting a gift for someone else, let me propose an alternative to the Pleasure Set: get the Mia 2 and Luna Beads for the lady-on-the-go ($144 for both), Siri 2 ($159) for a power boost, or just get the Mona 2 ($169), then be like “hey girl, I got you the best LELO has to offer. You know, according to a random girl on the internet.” PERSUASIVE.

Get the LELO Mia 2 at one of my fave shops:
SheVibe, LELO, Babeland, Pleasure Chest, or Lovehoney (international).