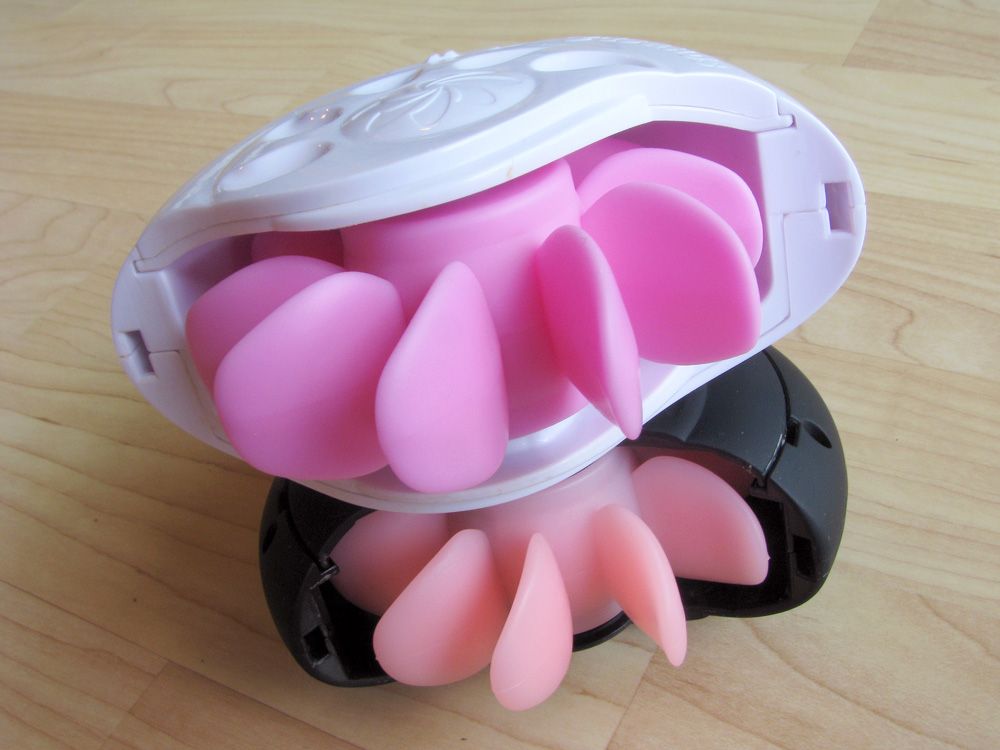 There are two newer Sqweels now! Read my reviews of the Sqweel 2 and Sqweel Go.

The only clue I had to the Lovehoney Sqweel was a cryptic yet enticing website with a swirly icon on it. But the icon reminded me of a shortbread cookie and the accompanying slogan was “A Revolution in Orgasms,” so I couldn’t resist the mystery product — even if I knew nothing about it. I can’t turn down a revolution.

My puzzlement upon opening the Sqweel should demonstrate to you that this toy is quite unique. I mean, usually I understand a toy immediately. But I looked at the black, clam-shaped thing with confusion, until I finally realized I needed to open it. Then I saw the tongues. Ooh. It was one of those why didn’t I think of that? moments. A series of soft tongues that spin! Genius! But my excitement quickly dissolved into one question: does it work?

And the answer to that question is far less glowing than my first impression.

First, the specs: the Sqweel is 4″ in diameter on its circular portion, 4 1/2″ in diameter including the three-speed switch on the protruding end. It takes 3 AAAs, which are included in the adorable trapezoid-shaped box. The Sqweel’s black case is made of plastic and coated in rubber, and it comes apart in two places. The top comes off to expose the 1″ wide TPR1 tongues for sexy time (and cover them up when sexy time is not imminent); the side unscrews so the wheel of tongues can be popped out and cleaned. Pretty cool, except for if you get lube or pubic hairs inside the case itself… because that part is riddled with nooks and crannies.

And getting off is a problem too. Primarily, the tongues can’t reach my clit unless I spread my labia and hold them open. Now, I’ve tried a lot of toys, and never once has a clitoral stimulator had this much trouble even accessing my clit. To make matters worse, the tongue wheel stops moving when pressure is applied to it. This happens on all three speeds, but is the worst on the first two speeds. In effect, I can’t just shove the Sqweel between my labia and say “go!”, because the tongues will stop moving. The only solution is to hold my labia open and try to relax… and ignore the fact that I’m holding my labia open.

It feels interesting, and definitely unique. Sqweel is much-touted as an “oral sex simulator,” but… a series of silicone tongues flapping over one’s clit does not feel like oral sex. It just feels like an attack of silicone tongues. I like the sensation, but I can’t really get off on it. Especially since I get sick of holding my labia open after about, oh, 30 seconds of doing so.

The Sqweel also makes a high-pitched mechanical sound that is not very pleasing to the ear.

In the end, the slogan “a revolution in orgasms” should be more like “a revolution in innovation.” The Sqweel’s design won Lovehoney’s Design a Sex Toy competition, which explains why the general design and theory behind the toy is brilliant. But to really excel as a clitoral stimulator, the Sqweel would need to shrink by 50%, have more power, and not sound like a kid’s mechanical toy.

Obviously, these dreams are far too lofty. So the Sqweel remains an innovative toy, but not a very practical one. Except when you go to store it and it becomes a sleek black clam. That’s pretty cool.