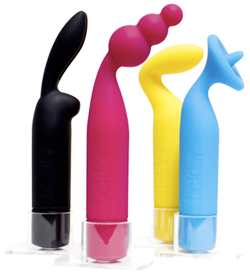 My standards for the Toyfriends were laughably low. I reviewed their predecessors, the Ticklers, and was astonished by with their lack of power. Although the Toyfriends are bigger and take AAA batteries rather than Ns, I was very skeptical.

There are four different Toyfriends: Coney (black), Bubbly (pink), Nosy (yellow), and Seti (blue). And yes, Seti is named after the Search for Extra-Terrestrial Intelligence — the manual even says so! Each toy is 7-8″ long and comes with a clear plastic stand and batteries. Each toy takes 2 AAA batteries, inserted into the base side-by-side.

The silicone on the Toyfriends is very silky to the touch. The shafts are completely rigid, and the heads don’t have much give (the necks bend, and the ears of Coney are flexible, but that’s about it). All the Toyfriends are waterproof. They contain O-rings, and I took them in the bath with me to test, with no issues.

The base of each Toyfriend is a large button that pops when pushed. Unfortunately, this button is not flat, so the Toyfriends can’t stand upright without their stands. The vibrations begin with the strongest steady vibration, which is followed by a weaker steady vibration, then three strong pulsation patterns (medium, faster, and very fast). I have never understood this highest-setting-first thing. Who on this planet wants to begin on the highest steady setting? Okay, maybe a few people, but not me.

The vibration strength surprised me, especially coming from two AAAs. I was skeptical about the power these would put out, but I must eat my hat. I can definitely come on the lower vibration setting, and the higher one is awesome (albeit difficult to access once I’m on the lower one). I also like the really fast pulsation mode because it’s super fast and doesn’t leave space between the pulsations. The different shapes have the same power output, but they all feel different in use.

Coney: As suspected, this one feels a bit like the clitoral stimulator on a rabbit — which is nice, but not amazing. The ears are both flat on the inside, so they actually tend to stick to each other (thanks, lube!), creating a solid, non-memorable shape. Unexpected use: put vibrating ears against butthole while pressing the shaft against clit. Not really my thing, but it’s interesting.

Bubbly: Great for clit stimulation, as I like tiny pinpoint stimulation. Even for me, though, it can feel a bit small clitorally. Does nothing for me internally.

Nosy: The crazy shape of this one has an interesting effect: it puts pressure on my clit without my having to do much of anything. I suspect that those who love pressure would like this one quite a bit. The head has a nice width to it that feels broad but not overwhelming. For dual stimulation, the tip can be inserted while the shaft vibrates one’s clit, but that feels awkward to me. In any case, this one’s FUCKING YELLOW. I think I now have all the colors of the rainbow in my collection. Life: complete.

Seti: Can be difficult to position correctly, but once I get there, it seriously rocks. The tip can feel pointy, for sure, but it’s intense in a good way. Seti does something I didn’t know I even wanted: vibrates my labia whilst pinpointing my clit. Generally I don’t like vibrations against my labia, but they completely work in these case. Impressive. Also, THE COLOR. Love it.

I was extremely impressed with how the Toyfriends feel, but they do have some issues. My biggest gripe would definitely be how fucking hard it is to turn these things off. Holy crap. I hold the button down for 2 seconds and 80% of the time, nothing happens. Sometimes I get lucky and the toy will turn off after 1-5 attempts. Sometimes, it will take 15 attempts. There is no trick, and no logic, which makes it all the more obnoxious. This happens with all the Toyfriends, so it’s clearly not a fluke.

Then there’s the weight and size of the toys. With batteries in, the toys range from 5.6 ounces to 6.5 ounces in weight, so they are pretty heavy compared to the Fun Factory Spring (4.2 oz), LELO Siri (2.6 oz), and even the Turbo Glider (4.4 oz). Couple that with the size (7-8″ long and 1 1/4″ in diameter at the base), and the Toyfriends are bordering on cumbersome, especially for clitoral stimulators.

There are definitely things that puzzle me about the Toyfriends, like why they begin on the highest vibration setting, why their shafts are so wide, and why they are so fucking difficult to turn off. They’re priced at a little over $50 each, which makes me a wee bit uncomfortable — $40 would be more reasonable — but they are unique (especially Seti and Nosy), which is better than a lot of vibes. Less wonky controls would’ve made these vibes phenomenal, but they’re still interesting, strong, and surprisingly fun.