If you find regular Fleshlights too damn big or if you desire a more lightweight wank, the Flight is a good ‘un. 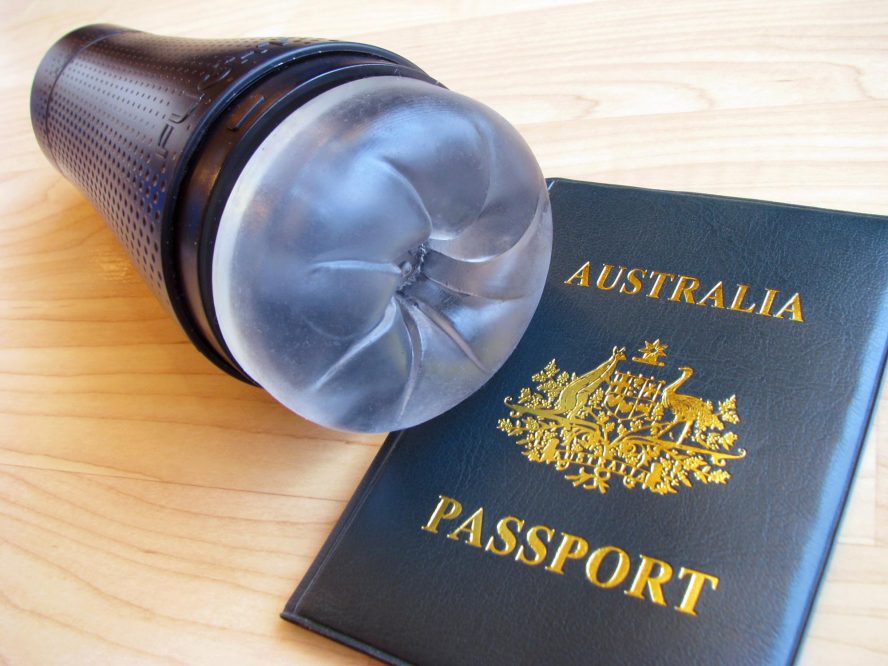 It is now quite nearly a fact: my boyfriend likes his Fleshlights plain. His first Fleshlight remains his unbeatable favorite because the inner canal is just how he likes it — soft and smooth as a baby’s butt. I should delete that. I really should. But I just can’t bear to do it. Don’t come at me, FBI.

Even with its inner texture and my boyfriend’s peculiar penile preferences, though, the Fleshlight Flight has jumped to the #2 spot on his list. Which is still composed entirely of Fleshlights, because he is a ~discerning gentleman~.

The Flight, in its case, is 2″ shorter than a regular Fleshlight, 35% lighter at 14.4 ounces, and .75″ smaller in diameter at the front. It is arguably one of the most compact toys that Fleshlight makes, similar in size to the Fleshlight Go and only larger than the Quickshot. What is this? Fleshlight actually admitting that not all penises are enormous?!

I find the Flight’s case, with its dotted texture and sleek shape, astoundingly more attractive than the traditional flashlight-fit-for-a-bear cases — and my boyfriend does too. Although he has big hands, he much prefers the compact Flight case to the regular ones. EXCEPT FOR ONE THING, and here is where he went all Epiphora on me: he hates the slanted base on the Flight case. Like, he will not stop shut up about how much he hates it. The slant prevents him from setting the toy upright during use, so instead it rolls around awkwardly on his desk.

The good news for you is that if you are not bothered by this issue (my boyfriend interjects from the other room, “who wouldn’t be!?” — SETTLE DOWN, HOSS), the Flight is pretty nice. It’s a solid toy for an average-sized penis, and if you want to bring it to Australia to see the pigs at the mall, it won’t take up half your suitcase.

The choice of clear (“ice”) Superskin rather than pink or cream is an interesting — but unfulfilling — one. The “ice” sleeves are usually reserved for the corresponding transparent cases, since you’re supposed to be able to get off on your ROCK HARD COCK raw doggin’ that SWEET TIGHT HOLE. You can’t do that with the Flight. Sadly?

The Flight’s orifice looks like a pinwheel, which pleases my boyfriend’s aversion to über-realistic vulvas and anuses. It’s also a really quick-entry hole, with no need to finagle one’s penis around to enter it. The texture starts immediately, as seen in The Creepiest Photo I’ve Ever Taken™ over there. Don’t stare at it for too long — who knows what could happen.

The “Pilot” inner texture of the Flight is fine, not too intense, and I’m told it just feels like bumps. The Flight is tighter than regular Fleshlights, but not uncomfortably so, and not nearly as tight as the unbearable Sex In A Can. However, there’s a spot a couple inches in where the canal tightens significantly. Because of the way my boyfriend uses his Fleshlights — he pulls his penis out as much as possible before stroking back in — he faces a lot of resistance from this tight area. It makes the jacking off motion jerky, like the toy is trying to launch itself off his penis. But he says this is not a huge deal. I just found it hilarious that the toy literally wants to take flight.

I like the Fleshlight Flight because it’s more stylish, more manageable, and allows users with average-sized penises to enjoy the entirety of what is usually a quite complicated inner texture (seriously, who is ever going to reach that final chamber in Stoya’s vagina?). Of course, if your penis is over 6″ long when erect, you’ll hit a wall. But if you find regular Fleshlights too damn big, if you desire a more lightweight wank, or if you want a sleeve for travel, the Flight is a good ‘un.

Get the Flight at Fleshlight, Spectrum Boutique, Early to Bed, Pleasure Chest,
Lovehoney (international), or Come As You Are (Canada).

Find the Fleshlight of your dreams at Fleshlight, Fleshjack, SheVibe, Spectrum Boutique, Early to Bed, Lovehoney (international), or Come As You Are (Canada).