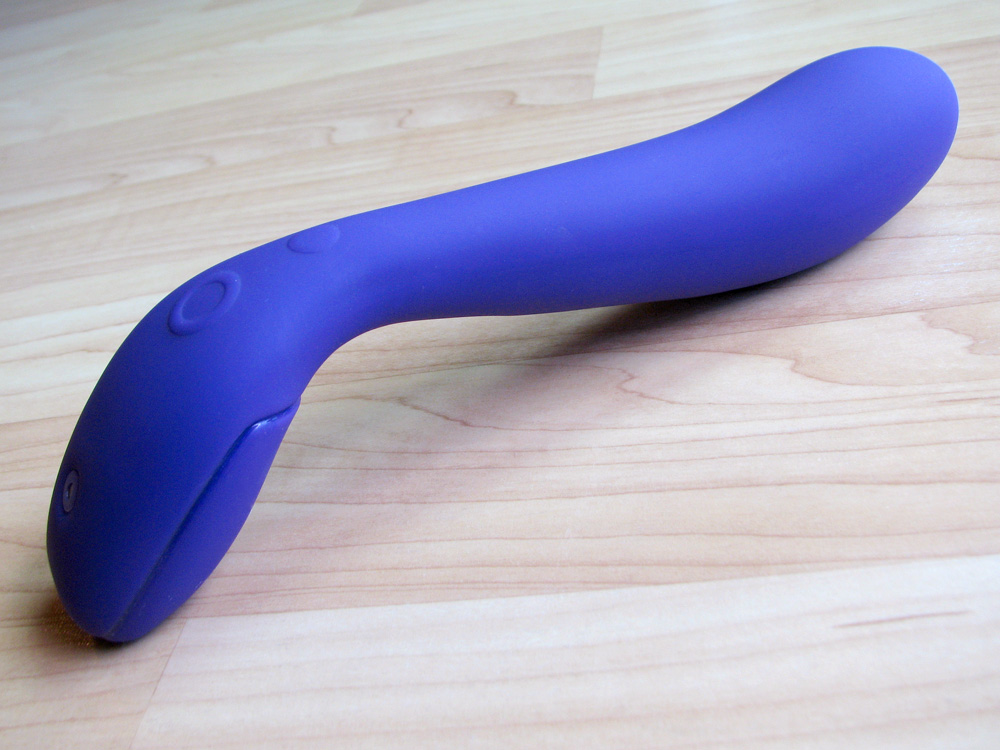 The Minna Ola has been in my sights since early 2010, which makes me feel old. But it did take a year and a half for it to hit the shelves of actual stores, and by then my initial intrigue had deflated a bit.

Ola’s packaging is some of the cutest I’ve ever seen. It comes in a sturdy cardboard tube; inside, the toy protrudes from a piece of foam like a proud bird, wearing a circular, three-page quick start guide around its neck. It also comes with a gray microfiber cloth drawstring bag, two-part USB charger, manual, and a sticker with an exclamation point on it. They really like! Their exclamation points! Over at Minna!

Ola comes in purple and pink, which… I’m not even gonna critique at this point. I feel like just stating those two color “options” tells you everything. However, they sort of make up for it with this sentence on their site: “Minna believes women know what they want and what they need.” WOMEN?! MAKING DECISIONS?! I DON’T KNOW, YOU GUYS, HOW CAN WE TRUST WOMEN WHEN THEIR UTERUSES ARE ALWAYS WANDERING OFF?

Ola is much smaller than I hoped. Because its shape resembles the NobEssence Seduction, I thought it would be a similar size. It’s actually only 8.5″ long, 4-5″ insertable, and 1.4″ at its widest. It’s covered in silicone, but very stiff all around except for the squeeze pad. It’s also waterproof and fully submersible. 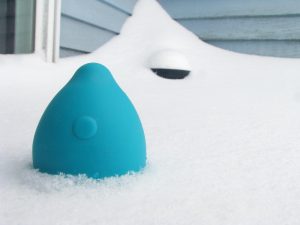 When charging, Ola is not exactly intuitive. One light pulses while it’s charging, and both pulse slower when it’s finished charging. I’m used to a full charge being indicated by a steady glow.

When you turn Ola on, it lightly pulses 1-3 times (the more the better) to inform you of remaining battery life. I like this, especially because it holds a charge exceedingly well. I’ve probably used it over 10 times on its first charge (in the month and a half I’ve owned it), and it’s still pulsing twice when I turn it on! The power also does not seem to have diminished.

Ola has two modes: freeplay and loop. Freeplay is virtually useless unless I’m nearing orgasm, because who wants to continually hold something down while they jack off? It works momentarily, and is exciting momentarily, but after a few minutes becomes a pain in the ass. It would be better if you had a partner controlling it.

Loop mode, however, is pretty badass. I’m continually surprised by how much I like it on my clit. I’m not big on vibration patterns, but that’s because most of them have breaks. Ola allowed me to create something more fluid, subtle, and organic than any pre-programmed pattern I’ve ever felt — undulating vibration with no awkward, jarring leaps. Apparently this sort of spontaneous variation is just what I needed. And the vibrations are fairly strong, somewhat rumbly, and satisfying.

I had to ask Minna about the playback capacity, and that’s how I found out it’s only 10 seconds. I mean, okay, 10 seconds isn’t terrible, but if your grand plans involve programming the entire beat of “Nookie” into the thing, you’re shit outta luck.

What also sucks is the set-up it requires. I can’t really just turn it on and be instantly in bliss. I have to program it to my specifications and not fuck anything up in the process. I have to lock the pattern, otherwise any little brush with the touch pad will reset everything I’ve worked so hard for. And I have to press the lock button in the midst of holding the pad down if I want to avoid any break in the vibration — which I do.

Ola also doesn’t remember anything when you turn it off. So when the cat is giving me the saddest meow and I have to feed her or risk my heart breaking, I can never return to the sweet, sweet rhythm I had going before that.

I was pleased with feel and the sensitivity of the squeeze pad, but it does tend to become indented after use. Minna explains that if it becomes “dimpled” I can “actuate the vent” (what is this, Scientology?) to re-inflate it, which is good because it seems to become “dimpled” all the time, especially in freeplay mode.

Early versions of the Ola had an extremely prominent seam all around them (pictured), which made it useless for penetrative purposes. Now, Ola is smooth as a baby’s butt, and I like it for insertion too. The G-spotting curve isn’t terribly significant, and the downward-leaning handle is sort of awkward, but having a unique pattern of vibration against my G-spot feels nice.

Still, my favorite way to use it is clitorally. It’s strong, waterproof, holds a charge well, nestles against my clit, and most of all, produces interesting and unexpected variations in vibration intensity unlike any other toy in my collection. I prefer it over the Limon, which buzzes my fingertips too much, and it’s a hell of a lot better than SaSi, which claimed it would learn what I like, but instead taught me how to hate everything.

Yet, the word exorbitant comes to mind. $150 is a lot of cash. For this toy to get my full endorsement, Minna would have to make it stronger and give it a longer memory. If I could save, say, 8 personalized patterns into it, that would make it worth the price. Even cheap drum machines can do it — why can’t this toy?

For now, the Minna Ola is a luxury toy for those who have grown bored of pre-programmed vibration strengths and patterns. But the drum machine aspect must be the reason for your purchase, otherwise I suggest you save $20 and get the stronger LELO Mona 2 instead.