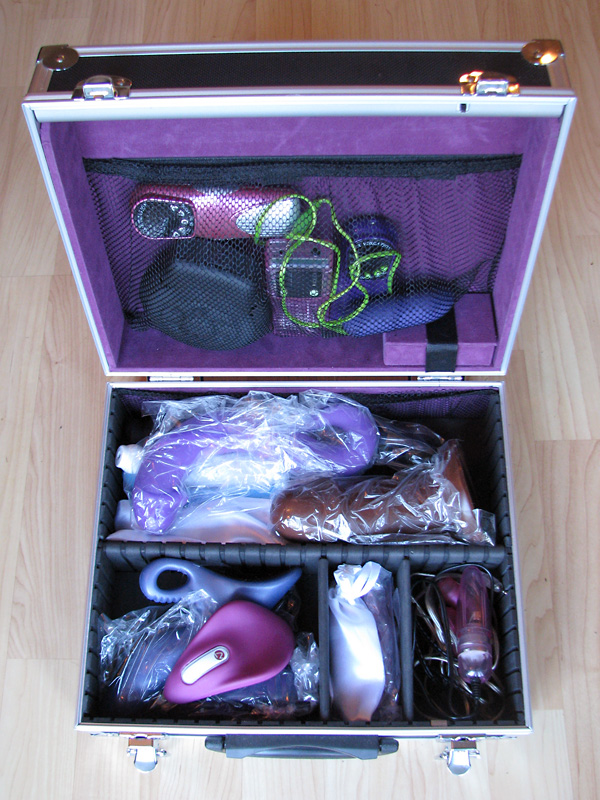 Do you need sex toy storage that could probably withstand a hurricane and also lights up inside? I’ve got a solution for you.

It’s called the Tunti Illuminating Boudoir Toybox, made by Tunti Enterprises. Tunti Enterprises is a small indie business run by a wonderful woman named Ilse Thompson, who has a really cute voice (I heard it on a podcast once). Personally, I only buy sex toys and storage from people from cute voices. I don’t know about you.

The Boudoir Toybox is 12.5″ x 10.5″ and made of textured black PVC with silver accents. It comes with two keys and has two independent locking latches and a black handle on the front. There is virtually no way of damaging this case, short of dropping it off a cliff. It is also, no doubt about it, the most discreet sex toy storage I’ve ever seen. It just looks way too heavy-duty and hardcore to be a sex toy receptacle. I asked the boyfriend what he would assume was in the Boudoir Toybox, and he said, “some kind of expensive technology.” Which could totally be true…

Of course, it has to come with something pink — and that something is a removable plexiglass divider that is meant to keep all the toys in their rightful spots (and prevent lube disasters, I would assume). I haven’t been using this divider because 1. I’m not traveling with the Boudoir Toybox (yet), 2. I hate pink, 3. It forces all the toys to fit perfectly within the confines of their respective sides.

The “illuminating” aspect of the Boudoir Toybox is located in the top part of the case; four white LED lights line the upper lid. Like a refrigerator, the lights turn on when the case is opened. There’s a little box for replacing the 2 AAs when they die. The lights aren’t really very bright, though, and they tend to illuminate only half of the lower part of the case.

A lot of sex toy storage fails in one key area: dividing the toys. At this, the Boudoir Toybox succeeds — or at least attempts to. The bottom part of the Boudoir Toybox, which is lined with dense foam, is set up with one permanent horizontal center divider and four removable dividers (one long, three short) that can be arranged a multitude of ways. There are flaws in this system, though — primarily, the notches that the dividers slide into don’t line up perfectly, so the dividers end up slightly askew. It’s irksome, especially to fussy people like me.

The lid of the unit, which is lined with purple velvet, features a mesh pocket that shuts with velcro. The Hitachi can even fit diagonally half-in the pocket, as long as you put it head down and don’t close the velcro. This pocket would be good for lube, batteries, condoms, and other accessories, although toys can fit in it as well. Oh, and there’s also a mesh pocket at the back of the bottom half of the case. I haven’t found a use for it, but it could hold batteries or lubettes.

Here’s everything that’s in it right now, though it could definitely hold more:

The Boudoir Toybox doesn’t beat my plastic chest, but I also know that I am completely abnormal when it comes to sex toy collection size. Still, the $70 price tag gives me pause. On one hand, Tunti Enterprises is a tiny business that needs to actually make a profit so they can continue making cases; on the other hand, $70 is a lot for a 12 x 10 x 5″ interior space, even if it lights up, locks, and comes with dividers. Plus, this thing is heavy, so if you take it on the road you will very likely feel like you are hauling a case of weapons around. But… that could be hot?

Update, 07-16-10: The bottom, black part of the Tunti case has stained one of my toys that was not in a plastic bag. Therefore, I will never use it for toys that I really like, and I won’t put anything in there without wrapping it with a plastic bag first. I talked to Ilse, though, and she is going to insist on dye-free lining for the next version of the case, and possibly buy some toy sleeves to include with her cases.