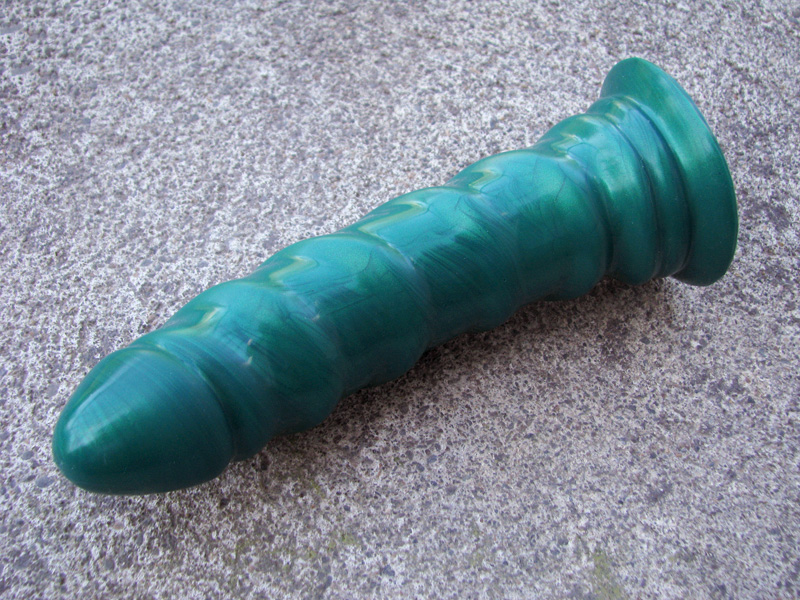 The Pleasure Works Rippler is like what the Tantus Echo wants to be when it grows up. It is a beast. A glimmering, swirly green beast; a beast that, sadly, promises much more than it delivers.

My first issue with the Rippler is that it is very, very stiff. Which I know makes no sense, since I adore wood, stainless steel, and glass. But I might as well admit it: my vag has been wooed by dual-density silicones such as VixSkin. Regular silicone just isn’t doing it for me much these days, and this is some of the least squishy silicone I’ve ever encountered.

Does the ribbed texture feel nice? Sure, but I’ve had better. The Echo feels much nicer to me, probably because it’s fashioned out of more plush silicone.

There’s just… other things I’d rather have in my vagina. Like, say I was doing a blind vagina test (WOULDN’T THAT BE AWESOME) with a multitude of toys. The Rippler is not one that would stand out to me; I would not be saying, “ooh, what’s that one?” while being penetrated with it. And sure, that’s better than “get it out of my vagina NOW!”, but it’s not a ringing endorsement, either.

The Rippler comes in a large plastic clamshell brandished with a list of perks such as “elegant stylized shape,” “harness-compatible,” “curved for G-spot or prostate pleasure,” and “designed by experienced sex educators.” And yes, it has a nice base that would work in a harness with a big enough O ring.