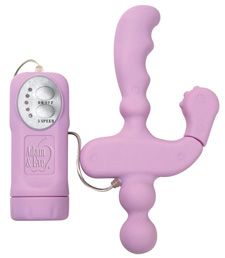 [You may be able order this toy on Amazon, although I think has been discontinued.]

A somewhat bored-looking, lingerie-clad woman stares back at me from her position atop Her Perfect Fit. Three cute icons at the bottom of the package explain that the toy is multi-speed, waterproof, and silky smooth. A picture of the clitoral nub boasts “FLEXI-TOUCH,” with arrows pointing both directions to signify movement.

I have been wooed previously by the prospects of other vibes that feature both vaginal and clitoral stimulation, but they have always fallen short in one way or another. Usually, the clit stimulator is the culprit. But the clit stimulator on Her Perfect Fit, it seemed, could be adjusted to my preference. That’s what Flexi-Touch means, right? Her Perfect Fit also comes with an agreeable price tag, so my interest was piqued.

I’m sad to say, Her Perfect Fit doesn’t follow through on its most enticing promise. Sure, the toy is definitely made of a velvety plastic (my favorite kind of plastic). Sure, it’s waterproof and has five speeds. But that clitoral stimulator? Its flexibility left much to be desired. Turns out, it would only flex upward, and even then, it didn’t click into place.

I have to say, I’m getting a little tired of toys getting my anatomy wrong! It doesn’t help, of course, that this toy is called Her Perfect Fit. But I know, the clit isn’t all that’s at stake here. So here’s what I have to say about the shaft: it definitely isn’t made for deep or rapid thrusting. The wavy shape is too pronounced, and that kind of thrusting is just uncomfortable (note, however, that I am still getting used to penetration). But slight movement feels great, and I was pleased to find that the toy stayed in place inside me when I fully inserted it. I was enjoying the vibrator, except for that pesky clit stimulator.

The good news is, I’m getting to the point where I can just look at a clitoral stimulator and know if it will reach my clit.