Shops that need support most: brick and mortars such as Early to Bed, She Bop, and Smitten Kitten! More info
Hi, I love youSex Toy ReviewsVibrators
December 3, 2013 44 5 min read

The feminist in me loves the idea of jacking off with something that our foremothers used — that will always be the Hitachi. 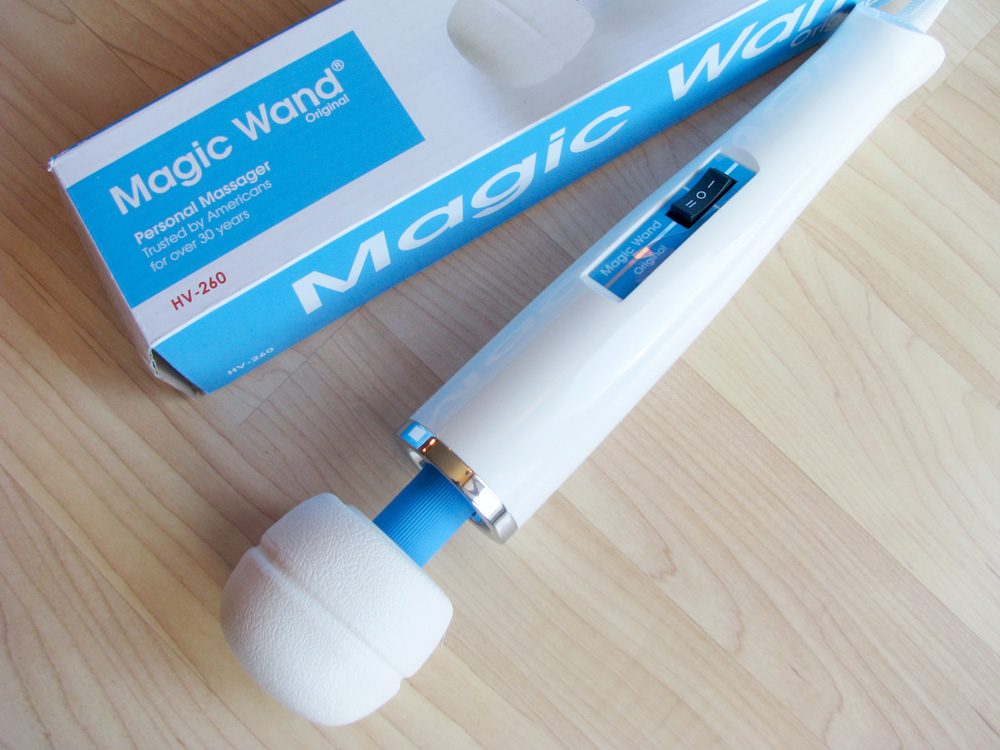 Wondering how I feel about the rechargeable version of this toy? I LOVE IT.

I finally get the Hitachi.

I am now old and my vulva is grizzled, and I have come to a place of understanding with the bumbling, imprecise beast that is the Hitachi Magic Wand. Perhaps that is how it was meant to be.

But there should be laws forbidding newbie reviewers from trying it. I received my first one a mere month after launching my blog, and I ended my almost-entirely-useless review with, “I know eventually I will sing your praises just as everyone else has. I just need time.”

Swayed, for sure, by the guise of sugarcoating, it was a sentence that, five years later — and thankfully for my reputation as a person who does not lie — has proven to be true.

Some backstory, first, on why I’m re-reviewing it. It’s now called the Magic Wand Original, because Hitachi had the most delayed reaction in the history of the planet, realizing ~11,000 days too late that people were using their “back massager” for NETHER REGIONS. Appalled that people would find pleasure in their objects rather than using them to bulldoze trees, Hitachi approached their massager’s distributor, Vibratex (a sex toy company…), and attempted to pull the toy from the market.

Vibratex said “no, fuck you,” renamed it the Magic Wand Original, updated it in a few small ways, took those poor achey ladies off its box, and yelled “THE MAGIC WAND WILL NEVER DIE!!!” from a mountaintop.

Under the hood, though, there is updated circuitry, more sturdy internal construction, a lighter body (barely — by just 1.3 ounces), and… well, remember how they were like “it’s even more powerful!!!” and we were all like yeah, right? Well, it ACTUALLY IS. Which… may or may not be a good thing? But it is stronger… buzzier… and louder.

The new “low” is situated somewhere between low and high on the old Magic Wand. Which, if you had asked Epiphora from 2008, would have been a maximum vulva itch inducer. But no, not today. In less than a minute, I christened it with its first orgasm — and began questioning why I’d let my first Hitachi gather dust.

As I figured out, the secret to the Hitachi is knowing when and how to use the Hitachi. Like when your partner’s on a quick beer run and you want to get ‘er done before they get back. Or when your friend is on her way to pick you up so you decide to have an orgasm through your pants. And then another. And another. Because she’s stuck in traffic and it starts to become like a fun game. I think I achieved four. With this toy, for me, orgasms beget orgasms.

Best times to use the Hitachi Magic Wand:

So that’s how it goes. I don’t take off my underwear, and sometimes even my pants, because putting the toy directly on my genitals is too much (this is, thankfully, solved in the rechargeable version). I hold the toy diagonally, so that the head touches the side of my clit that I prefer and not my entire fucking vulva. I pretty much never use the high setting. Most importantly, I re-position it a lot. This is key, I think, to preventing numbness.

But I still bristle like a porcupine when the internet suggests the Hitachi as The Perfect First Toy™. It is not. As I can attest, it is more of of an advanced sex toy than anything else. One cannot be led to believe that the Hitachi represents what vibrators are, because it is the anomaly. A massive, loud, whirring anomaly — more akin to a power tool than a sex toy.

The minor improvements in this new version are nothing to flail over. Don’t replace your Hitachi that’s still chugging along. But don’t be afraid to get a new one when it bites the dust, either.

Is it an essential? Sure, if you need really strong vibrations, or quick and dirty orgasms. For a lot of purposes, the Wahl and Mystic Wand are better. The feminist in me, though, kind of loves the idea of jacking off with something that our foremothers used and beloved — and that will always be the Hitachi Magic Wand.

This toy is built to work with US voltage only, and they don’t make one that is compatible with UK voltage. Alternatives include the Doxy, Bodywand, and Lovehoney Deluxe Magic Wand.