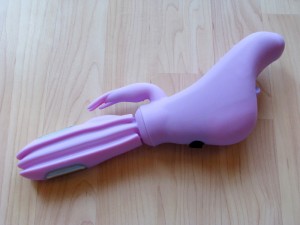 The Intensity, as the fable goes, did not begin as a sex toy. It began as a medical apparatus used to strengthen the pelvic floor muscles and treat incontinence. When product testers began experiencing an “unexpected” side effect — intense orgasms — the medical peeps contacted Jopen. Jopen knew just how to turn the thing into a true blue sex toy: they stuck a clit stimulator on it. And kept its original color of pukey pink-purple, because we all know women won’t touch anything outside of those shades.

So the toy was released, Jopen started throwing out phrases like “game-changer,” sex bloggers gawked at the toy’s hideousness, Jopen released a weird-ass video testimonial starring your friend’s mom who drank too much peppermint schnapps, and I had to have one. The Intensity is awkward, weird, and ugly… all reasons I needed to put it in my vagina. Besides, anything with the astronomical price tag of $250 needs to be thoroughly investigated. As someone said to me on Twitter, “Does it make your coffee?” To which I replied, “NOPE, JUST SHOCKS YOUR VAGINA.”

In life, the Intensity does not look nearly as polished as it does in the computer-rendered publicity photos; it has seams, and the silicone surrounding the electrodes is iffy. It also does not come with the 4 AAAs required to run the thing, which is just ridiculous for a $250 toy (but so is the fact that it’s not rechargeable). It comes with a 2-ounce tube of electrode gel, which proudly proclaims itself “salt-free”… in case you keep a pet slug in your vagina.

The manual instructs, “apply a reasonable amount of water based lubricant to the tip of the insertable portion of the device.” Yeah, be reasonable about it! Don’t go all haywire! But when applying the electrode gel, use a “moderate amount.” God, this is hard.

And you’d think that for $250 you wouldn’t have to manually inflate this toy, but you’d be wrong. That’s why the base is so goddamn huge. You have to squeeze it until the shaft reaches the girth of your liking. It begins at 1.4″ in diameter and inflates up to 2″ or so, which takes 20 exhausting squeezes. Also, you’re supposed to inflate it “to desired comfort” before turning it on. There is a very particular order of things. And you aren’t supposed to remove the toy while the electrostim is going, which makes me paranoid about burning my vaginal walls or something.

After all of the manual-memorizing and goo application, though, it’s not difficult to operate. It has 5 vibration intensities and 10 electro levels, all controlled separately.

I’ve never experienced electrostimulation before, which perhaps makes me ill-equipped to handle internal electro-stim. Still, I think I did pretty well. I was able to conquer the 10 settings in just a few sessions with the Intensity. But I did it for bragging rights, not because it was pleasurable.

The electrostim starts out as a tingling sensation, but it turns into a weird pulse that, as promised, makes my vaginal muscles contract involuntarily. I can just barely perceive the electrostim on level 3. It starts to feel weird and cause contractions around level 6. 8 is a little scary. 9 starts to hurt. But after I’ve made it to 10 and hung out there for a while, 8 feels way gentle, and the pulsations are barely perceptible to me at level 7.

The electric pulses are a second long, with a half-second gap between them. This may not sound slow, but it is.

And then there’s this stupid bump on the shaft, right under the clit stimulator, that is home to another motor. I want to kill this thing. It is in the worst possible spot and it fucking hurts. I’m told this is supposed to be a G-spotting bump, which does not make any goddamn sense as it rests just inside my vagina.

Actually, let’s talk about the whole G-spotting aspect of this toy, because of course that is promised in the promotional materials. The Intensity’s shaft is completely straight, and that bump is in the wrong spot entirely. I can’t thrust with this toy, and I can’t clench around it on my own — the two ways I experience G-spot stimulation. The electricity does not feel concentrated on my G-spot, and the involuntary clenching does not feel remotely the same as my own, voluntary clenching. Therefore, this is not a G-spot toy in the slightest. So stop lying.

Then there’s the three-pronged clitoral stimulator. Its vibration levels are buzzy and acceptable, but the shape is not. It pokes. It pokes my clit in surround sound. As if this toy wasn’t uncomfortable enough already.

But the key thing to realize is how damn distracting the electrostim is. I really cannot think about my clit when my vag is pulsing… pulsing… pulsing. And by the time I’m finally able to concentrate on my clit enough to have an orgasm, the orgasm feels completely out of my control. The pulses just go on their slow and merry way, doing whatevs they want to do, and my body doesn’t know how to process that amidst an orgasm.

This is perhaps the most egregious thing about the Intensity. This machine will decide how your muscles contract when you orgasm. If it is out of sync with what feels natural to you (hint: it will be), too bad. You will have to ride it out. And feel cheated at the end. Worth $250? I think not.

There are people in the wild world of the internet who claim this toy gives them “instant orgasms” that last as long as they want. How can I put this gently… um, I don’t know what these people are snorting. I seriously do not understand how this could be. Vaginal contractions are not orgasms. I just… I can’t.

This product is intended for use as an adult novelty product only. For external use only. Any product use for medical purposes or for a use that has an adverse effect on any function of the body is prohibited.

This is a very common warning on sex toy packaging, but in this context, it is especially ironic. Remember, although the Intensity was once a medical device, it is now a questionable sex toy manufactured by a huge company. If you want to improve your PC muscles, I recommend the archaic vag balls, which not only cost 80% less, but are under your vagina’s control. Or maybe the kGoal, which incentivizes kegel exercise and is maybe actually worth a chunk of change.

The moment they put rabbit ears on this thing, they made it into a sex toy, therefore implying that I am supposed to enjoy using it. And I really, really don’t. I don’t know what’s worse: the upsetting electro pulses, the painful “G-spot” bump, the poketastic clitoral stimulator, or the shitty orgasms. The phrase “waste of time and money” doesn’t quite capture the essence or true absurdity of this product, so I hope these 1,300 words have.