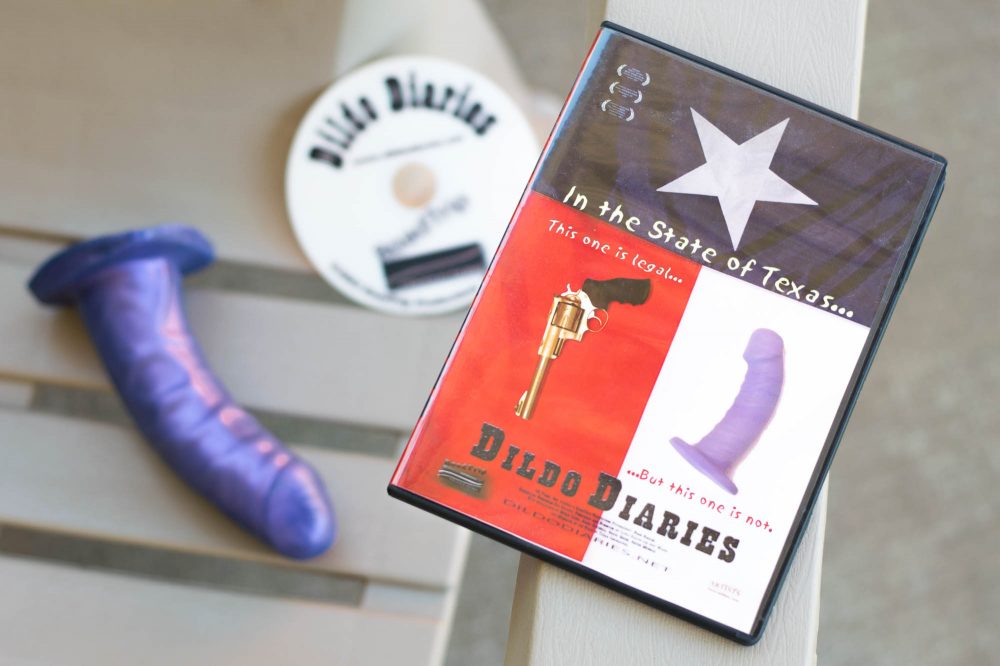 Seeing Texas’ law spelled out in Comic Sans feels both surreal and appropriate, as the beginning of the documentary reveals that the state not only prohibits the sale or promotion of “obscene devices . . . for the stimulation of human genital organs,” it also outlaws the possession of 6 or more said devices.

The law was enacted in 1973, championed by some douchenozzle by the name of Walter Mengden Jr. His nickname was “Mad Dog” because when he got up to speak, other members of the house would BARK AND HOWL. The documentary tells us nothing else about this man, ostensibly because that says it all.

The filmmaker catches on to this practice, telling the clerk she needs to buy a product “to educate a friend.” The clerk cracks a brief, knowing smile, before returning to please-don’t-prosecute-me mode to explain that items with suction cup bases are great for demonstrating condom application.

In this arbitrarily convoluted world, sex shops can sell items that resemble penises as long as they don’t vibrate, and they can sell things that vibrate as long as they don’t look like penises, but customers are forced to sign a release form stating their purchase is for “artistic, scientific, or educational purposes.”

One poor soul who merely wanted to buy a strap-on is interviewed about her experience. She had to adjust her language, explaining that her “demonstrator” was having trouble getting a condom on the “educational model” and therefore was afraid she might be “losing the audience.” I shit you not — this is the kind of verbal gymnastics required to buy an adult product.

At one point in the film, a woman outside a showing of The Vagina Monologues wonders breezily why women can’t just lobby to overturn the law? Ah, you blissfully ignorant creature, perhaps you’ve never met MEN. Or, as Rep. Debra Danberg calls the Texan ones, “bubbas.” It’s an uphill battle, considering these dudes think sex toys 1) promote deviant behavior, 2) are against the bible, 3) bring corruption to the state of Texas. You know, just general, all-purpose, unspecified corruption.

They also think discussing sex on the house floor is hi-lar-i-ous.

This is Rep. Warren Chisum, smug bastard and resident white guy villain of the film whose last name sounds remarkably like “jizzum.” Chisum fought to criminalize sodomy, believing that people who engage in the practice should be hanged. In an infuriating bit of footage (that is apparently the most requested video of a house debate in the history of Texas), Rep. Danberg takes Chisum to task, asking him pointedly what she should do if her husband’s penis accidentally touches her anus.

The filmmaker asks Chisum if he’s aware sex toys represent a billion-dollar industry in the US. “I’m aware of that… mostly run by organized crime, I suspect,” he says with a shit-eating grin. SURE, GUY, SURE. JUST MAKE UP YOUR OWN FACTS, THERE. Can you imagine if people in the adult industry were taking hits out on each other? I’m mad about bad sex toys, but I’m not that mad. Also, we’re too busy continually trying to prove our legitimacy to the rest of the world?

We need a reprieve from this bullshit. Quick, let’s blot out our pain with some bright lights and loud sounds in the place all sex industry movies inevitably go: Las Vegas for the AVN Adult Entertainment Expo!

OK, this is not helping our case. New idea: a visit to Topco Sales, a not-so-little family sex toy business in San Fernando, California.

Scott Tucker is the president of Topco, and I’m kind of in love with him. Flanked on all sides by ~blasphemous~ items, he speaks in a soft, unhurried way, gently bringing the truth into this decidedly ridiculous situation. What even is “phallic-shaped,” he wonders, in the language of an anti-sex toy law? If items designed to stimulate the genitalia are illegal, are feathers illegal? If the people of Texas can buy weapons to experience the thrill of shooting (cut to close-ups of dead animals in Chisum’s office — a sick burn), why can’t they buy sex toys to experience the thrill of orgasm?

Ahhhhhh. I want to fall asleep to the sound of his logic.

Indeed, it seems awfully hypocritical for republicans to be so pro gun rights yet so anti sex toys. Government should stay out of our rifle closets, I guess, but are free to invade our bedrooms — after all, there might be something perverted going on in there!

Finally, what sort of sex toy documentary would this be without a romp back to the 1800s, when vibrators were used to cure “hysteria”? And so we arrive at the Museum of Questionable Medical Devices in Minneapolis, where this kind gentleman, Bob McCoy, is happy to walk us through his collection of old-timey sex toys. His museum boasts 8 sets of “rectal dilators,” all of which were donated anonymously (was somebody cleaning out grandpa’s secret chest?).

…and here’s a PROSTATE GLAND WARMER from 1918, said to “excite a man’s abdominal brain”:

Yet still, it’s not over. In Alabama, you can only buy a sex toy if it’s for a medical, educational, or artistic reason — not simply self-gratification. No, never that.