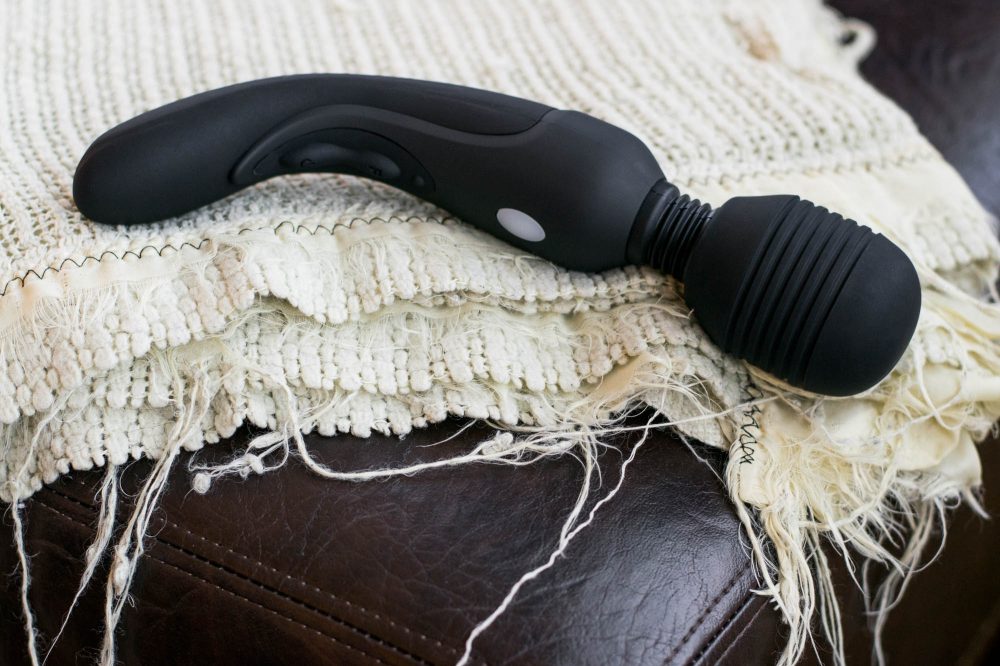 Vibratex’s original Mystic Wand, which I reviewed 5 years ago, is an old-school gem. Even all these years later, it remains a lazy masturbation favorite — one of the only vibes to survive my (inadvertent) exodus from battery-operated toys. Known for its uniquely intense vibrations, the Mystic Wand is great through undies, when I want something to cover my general genital vicinity, when the precision of the Mona 2 or Tango would be unwelcome. It’s perfect for hotels, sick days, when you’re holed up in bed with nothing to do but read scandalous fan fiction. It’s particularly handy when you want to get off but at any moment a dude might walk in your house to ask your opinion on the lattice design for the fence he’s building you.

To some extent, for me, all of this is still true in the Mystic Wand Rechargeable. But the power that buoyed the original is not present in this one, and it’s a problem. I had foolishly hoped they’d add power, not take it away. That seems reasonable, yes? Evolution, not regression? Instead, they kept the same 3 steady settings and 3 patterns, and… reduced the intensity. For everything.

I knew something was awry when I blew right past the first setting on the Rechargeable — which is not something I do with the original. In fact, I’ve had many a first-rate orgasm on that setting.

I can lay it out in no plainer terms:

The most revealing fact here: the original Mystic Wand is noticeably stronger on level 2 than the Mystic Wand Rechargeable is on high. LE SIGH.

A let-down, not a travesty.

I can get off with the Mystic Wand Rechargeable no problem, and I enjoy it, but I trust you to apply that information appropriately to yourself. For more sensitive people — and I count myself in that group, both when it comes to clitoral reaction and how quickly I cry when an authority figure speaks sternly to me — this amount of power is adequate. But if you need traditional Hitachi– and Doxy-level vibrations, this is not a suitable choice. And if you just want a good rechargeable toy, the We-Vibe Rave and LELO Mona 2 are both more powerful than the Mystic Wand Rechargeable.

There are several other admirable features of the Mystic Wand Rechargeable. It’s quite lightweight and doesn’t vibrate my hand. It has a single power button, then three identical function buttons in different locations to accommodate the various ways people might hold the toy. I’ve never seen this done before, and it’s GENIUS.1 I realize this is very much a sex toy nerd thing, but whatever. If you can’t innovate with power, innovate with button placement, I guess??

I’m indifferent about the curved handle. I always find this shape slightly bothersome and would prefer a straight handle, but I’m not going to throw a Twitter tantrum over it or anything.

Same deal with the useless ridges circling the head — I don’t need to get traction on my clit, so these just look like crevasses waiting to be filled with vag gunk. (My neurotic brain interjects, technically wouldn’t it be vulv gunk?) More worryingly, though, some bloggers have reported pretty serious issues with the construction of the Rechargeable.

Meanwhile, the original Mystic Wand is the elephant in the room. It has nothing left to prove — it proved itself worthy long ago. It hovers right behind the Mystic Wand Rechargeable, costing 20 bucks less for better vibrations. Without this guidepost of excellence, this bar, the Rechargeable would seem good. But its predecessor negates its usefulness.

You could say I’m bitching too heavily about the power issue, and you might be right. In the grand scheme of things, zooming out, this is nowhere near a terrible motor. That’s why I exist, though — to tell you it’s not the worst, but it’s also not the best. Objectively, even: the power isn’t enough, the vibration range isn’t there, and other toys do the same shit better.