Shops that need support most during COVID: brick and mortars such as Early to Bed, She Bop, and Smitten Kitten! More info
Greatest HitsSex Toy ReviewsVibrators
July 1, 2016 32 8 min read 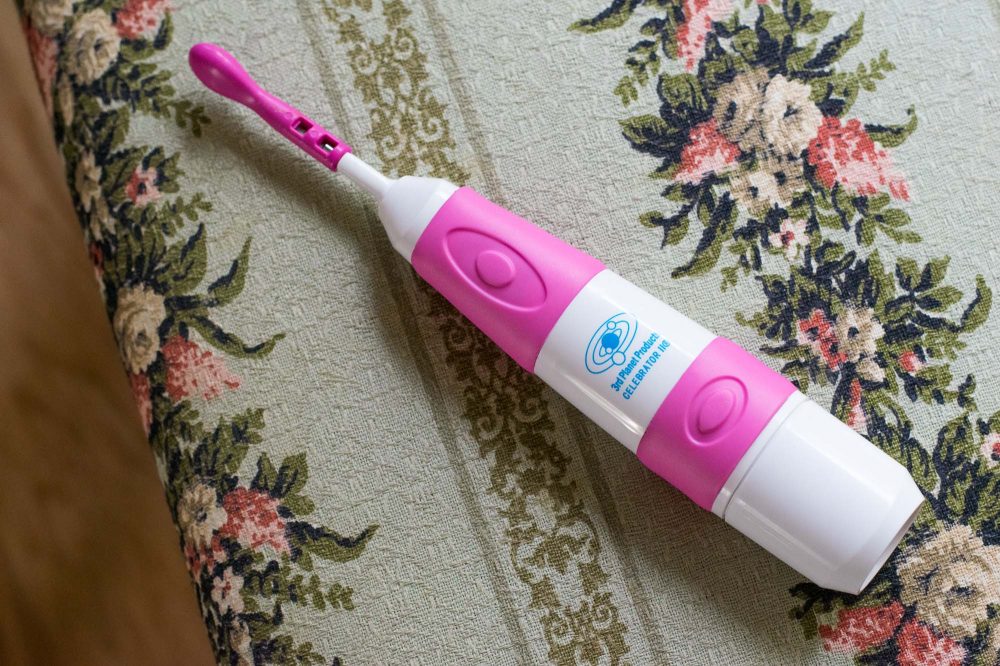 So, last year, while sitting in Joan Price’s senior sex workshop at Woodhull, I was sadly unsurprised when a male member of the audience piped up to mention My Celebrator… as an alternative to Joan’s (and my, and a lot of peoples’) beloved Eroscillator.

Because… you know… dudes know these things.

There were at least six sex toy reviewers in attendance, seven if you count Joan, and there was a palpable holding of the breath as we attempted to keep our visceral reactions to ourselves. I actually did the “zipping my lips” hand motion in some sort of ill-fated Hail Mary.

But the guy wouldn’t stop. He insisted that My Celebrator was superior. Joan wasn’t familiar with the toy and therefore had no ammo to combat his ridiculous claims. I felt a rebuttal migrating up my throat.

Then he made a rude comment about the Eroscillator’s cord and how it “gets in the way,” and I could no longer control myself. “The motors aren’t the same,” I blurted. “If you go on Eroscillator’s website, there’s a cross section of their toy versus battery-operated toys. The Eroscillator oscillates; it doesn’t vibrate.”

I wanted to explain that no self-respecting sex shop stocks My Celebrator — FOR A REASON. I wanted to add that its tips are disposable, which is sketchy. But I didn’t want to be That Guy™ at a workshop who has thoughts which he must suddenly and long-windedly share with the room. I didn’t want to derail the discussion further than it had already been derailed.

My opponent had no concept of restraint, though, so he kept yammering. He asserted that the “vibrational” power was the same. Yes, that is the word he used. I remember, because it was so perfect. It was like a caricature. My argument had reached his ears, but he would not allow such folly to infiltrate his brain. It was the best real-life example of mansplaining I’ve ever witnessed.

Before the workshop was even over, I was looking up My Celebrator on Amazon. The time had come. I bought two: one to use and one to dissect.

“What are we celebrating?” my girlfriend asked when My Celebrator came in the mail. Seriously, this thing looks like some janky beauty product you might order from a late night shopping channel. It looks, as one of my followers beautifully pointed out to me, like a pregnancy test. To say it resembles an electric toothbrush would be an insult to electric toothbrushes.

And its construction is laughably poor. The barfy pink bands encircling the toy are loose and can shift in use. It has four design elements that look like buttons and only two of them are actual buttons (???), when all the toy needs is a single button. On low, its noise level is tolerable, but on high it rattles and buzzes like a horde of trapped wasps.

The barfy pink tip is allegedly made of TPU, with a big ol’ seam down the sides. It’s rigid and doesn’t stink, but when I took a match to it, it went up in flames like an untended marshmallow. That doesn’t necessarily mean the material is unsafe, but the toy’s manual disturbingly informs me that its tips “can be used multiple times” and recommends replacing them if they become “rough or scratched.” With what? Clitorises that are secretly knives?

The tips are also sold individually, where they’re marketed as replacements for electric toothbrush heads:1

The pink colour also means that the men in your house won’t grab your toothbrush that easily to add a layer of dried toothpaste to your mouth-hygiene device; it’s obvious that the pink toothbrush is yours!

Now here’s the part where I scrunch up my face and admit something: I was half-wrong about My Celebrator. As an obscure battery-operated toy that looks like it was designed by the same person responsible for the clip art in Windows 95, I was so sure that the claims of oscillation would be false and that this toy would be a buzzy, clit-zapping nightmare.

It is fairly buzzy, but dissecting it revealed a standard weighted motor that whacks a little metal arm to create “oscillation.” Basically, it simulates an oscillating motor without actually being one, and the effect is similar: stimulation that feels different than vibration. Which I’ve been known to like. And, even coming from a barfy pink tip, I still like. It whips back and forth in an aggressive yet undeniably pleasurable way.

Without the Eroscillator as a point of reference, I can understand thinking this sort of sensation is the shit. I get it. It’s decent and it feels good, especially the low setting. But the Eroscillator is simply a more dignified, thought-out toy. It’s better than My Celebrator in every aspect except price.

For one, I’m not used to stimulation this pinpoint. Even vibrators I consider pinpoint, like the We-Vibe Touch and Leaf Life, have larger bodies that vibrate other parts of my vulva as I use them. With My Celebrator it feels like only a tiny portion of my external clit is involved in the process, and it’s officially Not Ideal. Want stimulation from something larger than a Q-tip? Only the Eroscillator, with its various attachments, has that option.

That’s what ultimately makes the Eroscillator a superior toy: its oscillations are slower, lower-pitched, and thus its stimulation is gentler and deeper. Its movements reverberate through my vulva in a really satisfying way. Every time I use the Eroscillator I’m struck by how welcoming it feels, like being served homemade chicken noodle soup after years of canned stuff. Orgasms with it are also more profound.

My Celebrator feels zippy, more accelerated, and my orgasms with it are average. It has no subtlety between low and high, so good luck if you want to take your time with arousal. My Celebrator is like something you’d find at 7-11 hanging between a box of bandaids and a bottle of aspirin. It works, it’s okay, but it’s overpriced and probably not a sound long-term investment. I’d never choose it over the Eroscillator, or over other vibrators I love.

I wanted to hate it more intensely. I wanted to be able to confidently raise my middle finger to that workshop guy. But in the interest of extreme truth-telling, of authentic reporting, of preserving my sparkling reputation, I cannot say that I do. I have hated things before, oh, many a time, and I know how it feels to have a toy so astronomically fail to bring me pleasure. Those things deserved all the ire I lobbed at them. My Celebrator is not on that level.

It’s more fair to say I hate the concept of My Celebrator. I hate what it stands for; I hate its hideous look and its outdated marketing and the way it makes people doubt the glory of the Eroscillator. I hate everything about it until I touch it to my clit, at which point I have to admit it’s not actually that bad.

It’s a shame I didn’t get the sweet vindication I expected, but I’ve been wrong a couple times before (remember when I told my friends it was impolite to yell “woo” at a strip club?), so I’ll survive. Is My Celebrator as terrible as I thought it would be? No. But as a person who is actually qualified to say so — due to my possession of a clitoris and lengthy history of sex toy testing — it’s no Eroscillator. And that is an indisputable fact.

Get My Celebrator on Amazon or the Eroscillator at SheVibe.