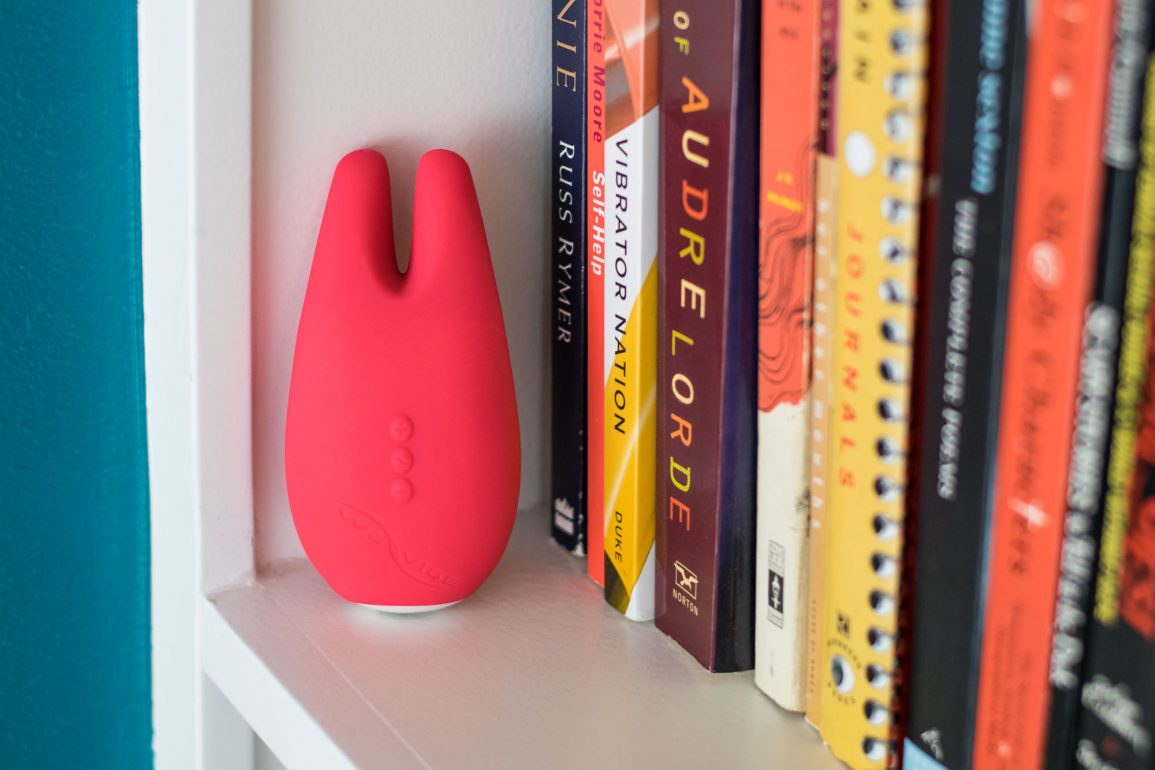 The We-Vibe Gala doesn’t even get me there. Even when it’s my first toy of the night. When I haven’t come yet. When I’m watching pretty boys blow each other in a fort or fuck passionately by an outdoor fireplace. It doesn’t turn me on… and it rarely, barely gets me off.

The Gala is a disgrace to the We-Vibe name. Among sex toy aficionados, We-Vibe is known for small rechargeable toys with robust motors, such as the Touch and the legendary Tango. I love their asymmetrical G-spotting Rave, the Nova is one of the best rabbit-style vibes I’ve tried, and Dusk gives me awesome hands-free orgasms. My expectations are elevated for this company, so an uninspired shape that seriously lacks vibration strength? Not gonna cut it. No self-respecting sex toy company should skimp on power like this, but We-Vibe especially shouldn’t.

They also skimped on ergonomic design. The Gala is comically oversized, especially for a clit toy; at 5″ long, 2.5″ wide, it makes me feel like I’m holding a hockey puck or something. The buttons are too small and indistinguishable, too close together, and located on the wrong side of the toy. The tips are firm and feel foreign against my body, and its bulkiness is strange and unnecessary. I guess you could lay the whole thing against your vulva, but… no. Wand vibrators are best for covering surface area, not weak-ass vibes with nothing else to offer this world.

It’s more than a matter of paltry vibrations, though. It’s also a matter of absent vibrations, vibrations that feel far away and unreachable — much like the concept of a functional democracy. Using the Gala is like trying to talk to someone while they stare at their phone: an unsatisfactory, one-sided conversation that likely goes nowhere. I have to CONCENTRATE if I want an orgasm out of it — a task not unfamiliar to me as a goddamn professional, but not something the average joe should have to endure.

So yes, I am annoyed by the Gala. Not unlike how I would feel at an actual gala: this is weird and I’m uncomfortable and when can it end. Like, can I just get out of here and grab some Taco Bell or something?

Gala’s vibrations make me question reality. I’ll be mashing the plus button fruitlessly until I realize I’m already at the highest intensity. Does it need to be charged more? Is it dying? There’s no way this is high… is it?

I’m only second-guessing it, I realized, because the vibration feels stronger against my fuckin’ fingertips than it does against my genitals. Still, I raced to my partners to ensure I wasn’t imagining things. I made each of them close their eyes, then I touched the Gala to their hands — first the side edge of it, then the prong tips. “Which is stronger, A or B?” I asked like an eye doctor. Both quickly chose A. THE SIDE OF THE DAMN TOY.

For a company known for its rumbly motors, it’s incredible how much power they sapped out of this one. On high, Gala feels weaker than the second setting of the We-Vibe Touch. HOW?! I don’t know, but it is not OK. Now, as was the case with the disappointing We-Vibe Wish, you can hack a slightly less offensive vibration into the Gala by using the We-Vibe app.1 But it’s not enough, and should absolutely not be necessary to make the toy palatable.

Well, we can survive if the base sex toy is actually good. Which the Gala is not. I’d rather use the Snazzy or Touch or Volta or Rabbit Bullet. I’d rather use the Form 2 for god’s sake, even with its glitchy weirdness and buzzy vibrations, solely because it has actual power. Oh, yeah. Standards are getting lowered as fuck.