Shops that need support most during COVID: brick and mortars such as Early to Bed, She Bop, and Smitten Kitten! More info
Greatest HitsHi, I love youSex Toy ReviewsVibrators
May 26, 2015 34 7 min read 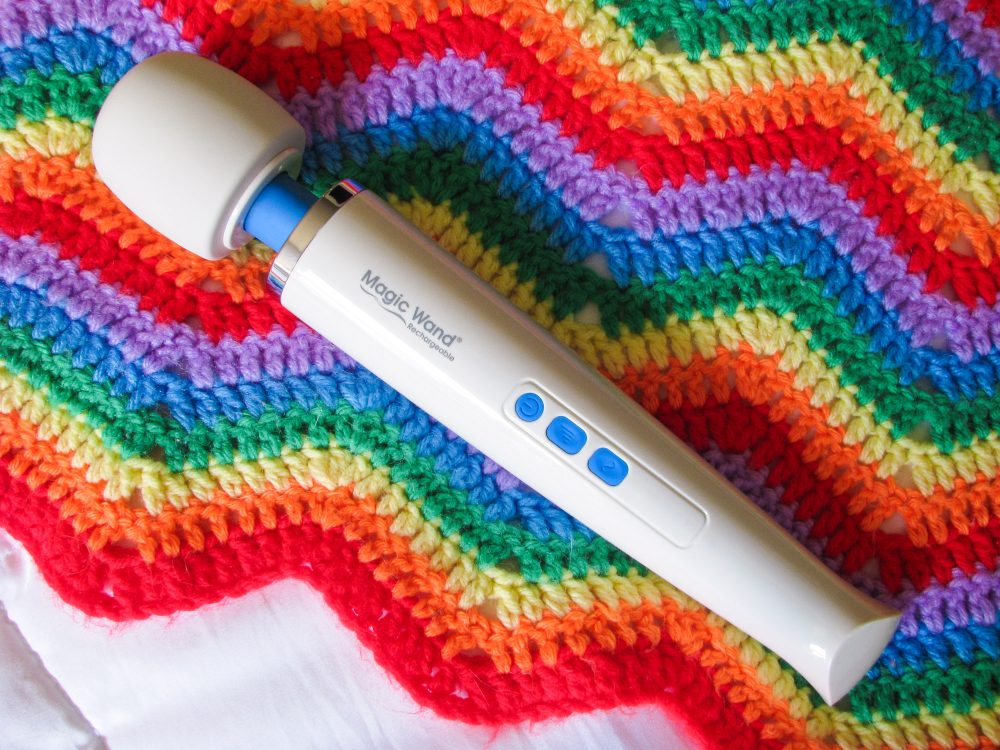 IS THAT A CORDLESS HITACHI?????

The world has been holding its breath, as have I, because there are many ways this new version could have gone terribly wrong. But release that breath. Let it out. Almost everything went right. This one is just as strong as the original — it even has two new lower settings that greatly enhance its possibilities. And there’s one particular aspect that went more right than I could’ve ever imagined.

The Magic Wand Rechargeable runs for 4.5 hours straight. On high.

It couldn’t be, could it? I’d taken notes and tried to count the minutes (which, by the way, is one reason being a sex toy reviewer is sometimes like a cruel masturbatory joke), but the number at the end of it all seemed outrageous. I must’ve gravely miscalculated, I thought. So I charged it completely and started over. I turned the toy on high at 1:30 p.m.

You could watch Gone With the Wind and still have half an hour left over with which to watch Natalie Tran’s YouTube channel. You could watch Titanic followed by two episodes of Catfish. You could fly halfway across the country, from Seattle to Austin. You could make crock pot chili. In each of these scenarios, your Magic Wand’s charge would last the entire time.

And if you still needed to get off after that, you could use the toy while it was plugged into the wall.

There is one caveat to this, and it’s the single detail about the Magic Wand Rechargeable that I can’t get behind at all: it shuts off automatically after 20 minutes. Actually, I tested it, and it’s more like 19.5 minutes. This “feature” is supposed to prevent the toy from overheating, and you can immediately turn the toy back on, but… seriously? This is a silly, overprotective gesture that just begs to be defied, like your mother telling you not to open things with your teeth. I do not plan to abide by these new rules, at least until the day my wand overheats and I have to buy a new one.

But I doubt that will happen, because the Magic Wand Rechargeable barely heats up. While the handle on the original Magic Wand becomes distractingly hot after about 20 minutes (and I always take it personally, like, “WHO ARE YOU TO JUDGE ME FOR HOW LONG I’M TAKING TO COME?”), the rechargeable version never meanders past mildly warm — even after I ran it for 4.5 hours straight.

I try to circumvent the 20-minute auto shut off by turning the toy off and back on before it makes the choice for me, but I don’t always remember to do that and it makes me rage every time.

Aside from this, though, many irksome aspects of the original Magic Wand have been improved in this version. The Magic Wand Rechargeable is quieter: a lower-pitched buzz instead of a high-pitched “the fuck is that?” whir. The head is smooth and finally made of silicone. The handle doesn’t vibrate my hand nearly at all. It has lights to indicate which setting you’re on — there are four steady and four patterns — and when it’s on the verge of death 1 it blinks red at you, like, “sorry, hoss, get the cord.” (This means you have only a few precious minutes of power left, as I found out one unfortunate day.)

You can use it while plugged in, which deserves mentioning once again because that’s badass, or it takes about 3 hours to charge.

A few things were left unchanged: the cord is only 6 feet long, the toy is not waterproof, and it’s still a vulva hog. I normally hate vulva hogs, but that’s because I use most vibrators with my pants off while trying to also maneuver a dildo in my vagina. That’s not how I tend to use the Magic Wand. I usually use it through my underwear, and sometimes even my pants. It’s too broad for my tastes, so I hold it diagonally to reduce the surface area, targeting the dominant left side of my clit. It has brought me to many a lazy orgasm.

I’m a bit of a sex blogger stereotype when it comes to my love for the Magic Wand, but I will have you know I’ve never sung into it like it was a microphone. I have my limits.

My most favorite thing about the Magic Wand Rechargeable is the addition of the two lower steady intensities. This is what the Magic Wand was missing: vibration settings that adequately ramp up to the two other intensities often dubbed “fuck” and “holy fuck.” I can even use the toy with my underwear off now! The second setting is my vulva’s top pick, but I appreciate knowing the two highest intensities are waiting for me if I need them, if I’m drunk or overstimulated or simply want to speed up the process.

A sweet side effect of these lower settings, too? They make attachments more pleasurable by toning them down. I’ve begun a recent love affair with my Flutter attachment, which on the original Magic Wand flaps so hard and loudly I dare not put it close to my genitals, but now can waft gloriously against my clit. I’ve got my eye on the Nuzzle Tip next.

Here’s a chart for the sex toy nerds wanting to know where the different steady intensities of the Magic Wand Rechargeable land in the grand scheme of things. Most intense settings at the top.

For the record, I love every toy mentioned in this list except for the LELO Smart Wand, which can suck my clit. The Magic Wand Rechargeable is cheaper, stronger, fits comfortably in my hand, and doesn’t vibrate the skin off my body.

At $125, the Magic Wand Rechargeable costs two times as much as the original, but it’s not a horrible amount considering gerbil-sized vibes like the Minna Limon and wand-style frenemies like the Doxy are priced similarly. It also comes with a one-year warranty and, uh, can get you off in record time. Let’s not forget that. Because it remains this toy’s biggest asset.

Who should not buy this version? Folks who only ever use the highest speed on their Magic Wands, or those who prefer the old style textured head. Also, people who don’t desire anything stronger or more broad than, say, the LELO Mona 2. But if you’ve always wished your Magic Wand had lower settings, or if you’ve fantasized about snipping its cord like a newborn, or if you’ve hesitated on buying it previously due to the lack of settings… yes. Get.

The Magic Wand Rechargeable is an iteration truly worthy of the illustrious Hitachi name. I’m sure Hitachi is very displeased that taking their name off the product didn’t stop people from referring to it as such, but 30 years of perversion can’t be wiped away easily… and probably never will be.

Get the Magic Wand Rechargeable at SheVibe, Early to Bed, Good Vibes, Smitten Kitten,
Spectrum Boutique, Come As You Are (Canada), and Lovehoney (international).