Shops that need support most during COVID: brick and mortars such as Early to Bed, She Bop, and Smitten Kitten! More info
Hi, I love youSex Toy ReviewsVibrators
December 26, 2017 6 8 min read

If you want to target your clit with laser-like precision, this purple weirdo might be just the thing.

I… really like it. It’s different — for once, in a good way.

I enjoy the Zumio X, and I have no problem saying so, BUT PLEASE KEEP READING. You can’t just blissfully skip off with that as your only knowledge. I have more words — the best words, actually. Words that can help you determine whether the Zumio X is right for you. (Come to think of it, “Zumio” does sound a bit like some sort of ridiculously-named boner medication…)

The thing that makes the Zumio X unique is its antenna-like SpiroTip™, which I’m only going to say once because I’m deathly allergic to dorky trademarked names. The tip is made of hard plastic and it’s teeny tiny — at 0.2″ in diameter, it’s about the size of a bead or a stud earring, and smaller than anything I’ve ever pressed against my clitoris in pursuit of orgasm.

The toy’s overall design doesn’t exactly scream “sexy” to me… it’s that ubiquitous sad purple, resembling a squiggle pen moreso than a sex toy. (Though any hormonal 13-year-old might conflate the two.) Both the included satin storage bag and charging cord are subtly labeled with the name “Zumio,” saving me two inches of masking tape and a lot of grumbling. The toy is waterproof and charges inductively by sitting in a stand. There’s a plastic cover you can sheath over it for “discretion.” Charges are loooong, at 16 hours, but it lasts about 3.5 hours on a single charge and can be stored in the stand with no ill effects.

Zumio’s website urges me to “Join the Pleasure Revolution™,” so I’ll be sure to Hop On That™. Here, the vulva is “your pleasure zone” and the word “women” is thrown about with wild abandon. The Zumio X’s tip feels like “the circular motion of a fingertip,” the website claims. “By comparison, the large heads and irritating buzz of traditional vibrators feel boring with no way to create different sensations.”

Then there’s the marketing, which I absolutely must dismantle. In a move sure to make most people feel defective, the manual encourages users to “try the Zumio 60 Second Experience,” essentially promising an orgasm within one minute of bringing the thing near your genitals — a bar that even I, a professional sex toy reviewer, can’t clear. NOR DO I WANT TO! Because speed ≠ pleasure! Despite what all this modern sex toy marketing says!

Hi, myth-busting Piph reporting for duty. The Zumio X feels nothing like a finger, #sorrynotsorry. Only rarely have I ever had trouble targeting my clit with toys, and that’s due to bad design, not the size of the head. Only crappy vibrators have an “irritating buzz.” And here I feel I must emphasize, the Zumio X is not better than other good toys. It’s simply different.

The Zumio X’s effectiveness is a bit of a mystery to me, honestly. It’s superficial, localized stimulation, and it touches so little of my body, yet somehow, my clit is into it. I took a slow motion video of the Zumio X next to the Eroscillator to test its claims of a whirling tip, and you can see that the Eroscillator’s oscillation is much more pronounced. Is Zumio’s “technology” anything more than good vibration funneled to a point? I doubt it, but the keyword there is “good.” The tip is the conductor, but the rumbly vibration quality is crucial to my enjoyment of this toy.

It feels, almost, like my clit is vibrating of its own accord, like no toy’s involved at all. It’s really low-profile, taking up basically no vulvar real estate — particularly appreciated when I’m stuffing myself with large or unwieldy insertables. Very very little vibration is transferred to my hand in use, which is impressive considering how powerful this thing gets. It has eight steady intensity settings, a delightfully subtle ramping up, and the perfect number of vibration patterns: zero. 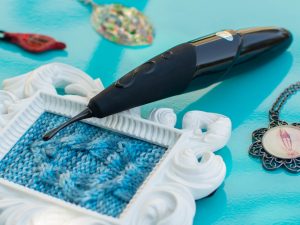 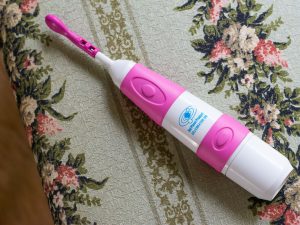 The Zumio X is so intense that some might find it overwhelming, but I learned a special trick to remedy this issue. One day I absent-mindedly pressed the toy’s tip against my outer labia, near my clit, and it was… kind of amazing? The fleshy buffer sent the vibrations reverberating throughout my vulva, a ripple effect of more expansive pleasure that still shook my clit enough to bring me to orgasm. This is a rarity indeed, as I almost never stray from direct clitoral stimulation, but it’s a technique I use regularly with the Zumio X and one that makes me feel nice and smug about stepping out of my clitoral comfort zone.

This toy has a few strange quirks. The buttons are in the complete opposite spot they should be — wrong side of the toy, wrong end. So I end up holding it almost like a pen, or a craft tool… like I’m applying puff paint to my clit. (Hey, same precision.) The Zumio X’s tip is also so tiny, I encountered a problem I’ve literally never had: a surface so small it’s impossible to drip lube onto it.

Realize, as well, that the Zumio X makes literally every other sex toy seem gigantic. While other toys vibrate my clit and the surrounding area (yes, even pinpoint ones), the Zumio X hones in on my clit like the macro setting on a camera. When switching to or from another clitoral toy, my brain needs a few minutes to re-calibrate — a testament to just how different the Zumio X feels.

(It’s also, sidenote, great for scratching itches in your vagina.)

My first Zumio X, I should mention, went haywire and had to be replaced. This toy has a standard one-year manufacturer’s warranty, but I can’t help wondering, who is this company anyway? Where’s the pedigree, the reassurances in their ability to manufacture long-term vibrators? Their site says the company is run by “the same talented individuals behind the development of several of the world’s best-selling adult vibrators,” a suspiciously vague and meaningless claim from a company that just popped up out of nowhere. I wish I felt I could trust the quality more.

The Zumio X costs $98 and has been birthed into a world already populated by a bevy of amazing toys. Its closest competitor, the Eroscillator, is a timeless toy with oscillation that feels much deeper than the Zumio X’s vibration — making it a better investment, especially considering its dependable AC power and interchangeable attachments. The powerhouse We-Vibe Tango is only $80, and small rechargeables these days can cost as little as $40. The Zumio X is also not as versatile as vibes like the Sassy ($60), Rave ($109) and Mona 2 ($169), which can rouse the G-spot if inserted.

Hindered somewhat by its charge time, quizzical button location, and specific use, the Zumio X is nevertheless a quite enjoyable toy. It’s not for the faint of clit, and it’s very very very very pinpoint (just want to make that abundantly clear!), but its vibrations are good and no other toy I can think of replicates its sensations. If you want to target your clit with laser-like precision, this purple weirdo might be just the thing.