Sit down, friends. I would like to talk to you about incest.Â I’veÂ slyly alluded to it before, but this month marks the discovery of something glorious: New Sensations’ “Tabu Tales” series. Directed most of the time by the fantastic and nuanced Jacky St. James, this series is everything I never knew I wanted, and I LOVE IT.

My obsession began with Incestuous, in a scene featuring cheerleader Riley Reid and her “stepfather” Alec Knight. Riley is a boss at playing down her age (she even moans “oh gosh”), and Alec, well… he’s the ultimate creep. I seem to be developing a thing for creepers. Don’t tell any dudes on the internet. Please.

My jack-off fodder is quite varied, as previous installments of this journal can attest. I like the straight, the queer, the mainstream, the taboo — the romantic candlelit bullshit all the way through people acting like dogs and consensual rape scenarios. So I didn’t think these incest and creeper fantasies were that weird, until one night when I drunkenly confessed them to some friends, and all I got in return was “I sometimes jack off to two photos side by side.”

Multi-tasking: watching Power and Control while making chicken tortilla casserole. I waltzed into the kitchen and left the video file playing on my computer. As I layered the tortillas, beans, and corn, I became increasingly aware of how the girl sounded like a dying seal gasping for breath. I vowed to look her up: Jessie Andrews. Never again. She’s cute, but no.

As the casserole cooked, I made a huge mess comparing the Ash Girl to the Star Delight and powering through two Monas. By the end of it, everything was so caked in dried menstrual blood that my perverse desire to photograph the scene overtook any understanding of social boundaries.

So much bonding time with my Hitachi while in the throes of house-hunting, money-offering, house-inspecting, and world-moving. Out of nowhere, in a blur of stress, I’d come to the realization that I was in dire need of an orgasm.

I bid a defiant goodbye to my previous jack-off locale, the ever-glamorous living room.

The monumental christening of my new office. Hours before this I hadn’t even wanted to exert the effort of holding a toy, opting for the We-Vibe 4, but that just made me hornier. So I laid out the toys of the evening, LOCKED MY DOOR (!), and got down to motherfucking business.

I wanted to stop after my second orgasm, but I made the frigthening realization I had not yet squirted on my office floor. So obviously, I whipped out the Pure Wand and Mona. Soon, I was gushing heavily and I could feel my ejaculate spurting upward, like a fountain.

This created a 16-inch puddle on my towel and a surge of pride in my soul.

I love that when I post a photo like this one, my eagle-eyed followers start yelling things like “SPARKLY ACUTE?” and “WHAT IS THAT WEIRD PURPLE ONE?”

Yes, that is a pale pink sparkly Tantus Acute from back in the day, and well, that weird purple one is the Oblivion Purple Cherry, and it is so buzzy and terrible I probably only used it for 2 minutes. Too bad, because the shape is cool.

The world could not wait much longer for my LELO Mona Wave review. Therefore:

I thought I was such a genius when I stuffed the We-Vibe Dusk in my vagina right before hopping on my elliptical. Sadly, it only made me want to pause my movements so I could focus on the vibration against my clit. Also, Food Network Star is maybe not the kind of thing I want to have an orgasm to. It’s no Incestuous, OKAY?

Watching this fabulous scene between Q-Tip and April Flores, I was struck by how far Courtney Troubleâ€™s aesthetic has come since I wrote about their DVDs back in 2010. Now their stuff is so nicely lit, with great angles, fluid editing, and thoughtful music.

See, if Courtney Trouble can do it, so can I. 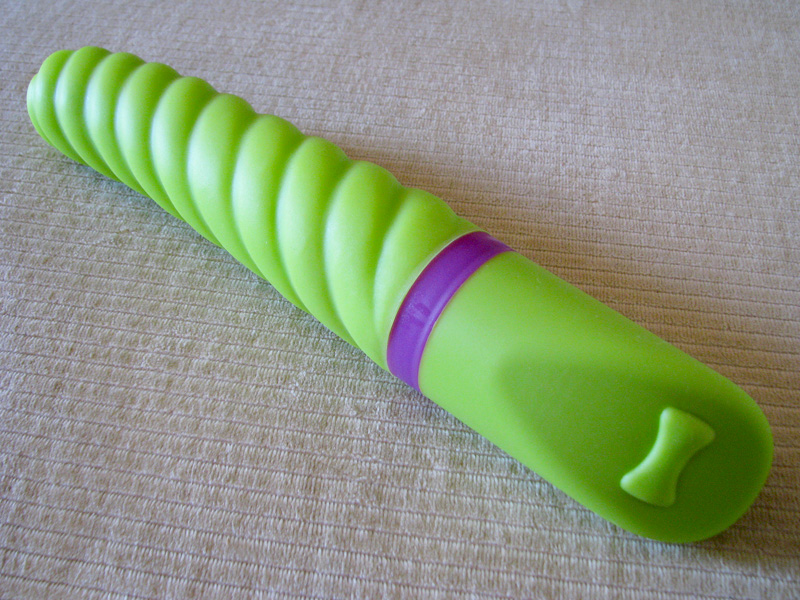