A decade of sex blogging

The clichÃ© is true — it feels like just yesterday and like forever ago. This week marks 10 years since I first published a review of a sex toy on the internet.

It was fall 2007, my junior year of college. That summer, I’d moved out of the dorms and into my first apartment. I was 20 years old, almost 21. If you’d asked me what my career was going to be, I would’ve hesitated and posited, “…writer? I hope?” A cautious optimism underneath which lied a practical fear. A fear that I could never make a living with writing, that I’d end up in an office job, probably, and that the only skill I’d spent my life cultivating would eventually be relegated to a hobby. It was just a matter of when.

But life doesn’t always go the way you think it will, even if you have little perception of how it will.

It was with this budding interest in sexuality that I stumbled upon a call for toy reviewers on a retailer’s website. A total fluke, but the timing was right. It sounded like a fun diversion from the tedium of academia, a good way to experience sex toys without having to pay for them, and a more relaxed form of writing than the stuffy papers I was churning out. I signed up.

Basically, I didn’t know what the fuck I was doing.

But do any of us, really, at the beginning of anything? I’ve waffled on whether to count that year of reviews pre-blog, never sure whether I’ve been doing this for 9 years now or 10, but you know what? That year mattered. As bad as those reviews are, they were necessary. They were inevitable, unavoidable. I cringe at them now, but there’s a certain adorable cluelessness within them.

As I reviewed more and more, I began pondering the idea of starting my own blog. I’d always figured sex blogging wasn’t for me — I didn’t have hot sex stories to share with the world; my writing does not aim to titillate. But maybe I could do it my way? Focus on straightforward reviews of sex toys?

I’ll try it, I thought.Â See how it goes.

Just a hobby: the early years

Blogging wasn’t paying the bills, but I never thought it would. I made a grand total of $3.99 in my first year, from affiliate links in my reviews. About a penny per day.

It was the beginning of a beautiful relationship with my G-spot.

Around this time, my few industry connections led me to meet with two local women who were opening a sex shop in my city. I pretended my minuscule blog was evidence of my qualifications, and they… believed me. I was hired part-time, despite having zero retail experience. I was their first employee.

It still seemed odd that anyone knew about my blog, let alone cared. But somehow they did. Sex educator Tristan Taormino came to town to teach and asked to have breakfast with me, wanting to hire me to handle her social media. I’ll never forget standing outside the restaurant at the end of our meeting. “You’re so much nicer in person!” she exclaimed.

I felt immeasurably complimented. Online, I could be myself. Just as honest and snarky as I truly am. I’m an introvert, and as a kid I was often described as “shy” — a word that masked my feisty, opinionated nature. Unlike in life, where I’d fumble over my words, online I could take my time and hone my phrasing. It was validating. It felt like home.

My blog was evolving, too, even if I couldn’t see it. In January of 2012, I looked back at my income spreadsheet from the previous year and realized something remarkable: I was making money with this gig. Not an astronomical amount, but enough to cover living expenses and food each month.

Could I do this… as a career?

The coming out era

My parents still didn’t know I was a sex blogger. I swear, it made sense at the time. Back when blogging was solely a hobby, it didn’t seem necessary to tell them. Besides, I feared my mom’s overzealous snooping. Part of me bought into our sex-negative culture, and I was convinced I didn’t want her reading intimate details about my vagina.

But I needed to tell them. So I finally built up the courage to do it.

It was terrifying and it was wonderful.

Meeting people scared me, so I taught myself to do it anyway. At conferences, I perfected the art of luring strangers to my hotel room with promises of wine and camaraderie. Simply being in a hotel room with other sex bloggers was a revelation. It was like seeing old friends, even with folks I’d never met. We stayed up so late laughing and bonding. Sleep would mean less time with these amazing people; I couldn’t justify it.

It all felt like a dream I’d stumbled into.

But it wasn’t a dream. I’d earned it. I’d written 500 blog posts, for god’s sake. There was rarely a day when I didn’t work on my blog. Over the years I’d become more business-minded: selling advertising on my site, utilizing affiliate links faithfully, promoting sales. The numbers couldn’t lie: 80% of my income came from my blog, and now it was exceeding my baseline cost of living by quite a lot. Sex blogging had become my job. My job job.

Meanwhile, my circle of sex blogger friends was growing exponentially. Now I even had friends in my city. They’d come over to my apartment, drink rum mixed with orange juice, ride my Sybian, and talk shit about sex toy companies with me. We started taking short vacations together, filling our days with productive blog writing, photo-taking, and toy testing, and our nights with games, laughs, and bad sex documentaries. #dildoholiday became a tradition.

When the next conference rolled around, my friends and I decided to organize a small sex party. It was perfect timing, because I had my eye on a very cute fellow blogger named Aerie. In that hotel room, in front of our friends, we had sex for the first time. Playful, sweet, awkward, perfect sex.

Afterward, the whole room applauded us and one of my friends said, “um, I have something to tell youâ€¦ I think you’re gay.”

Community, connection, and opening up

I’ve always been queer, but there were many years where that part of me fell by the wayside. It wasn’t on purpose — I started dating my boyfriend when I was still in high school, and monogamy was the default. But he knew I was attracted to everyone, and he knew I craved more diverse sexual experiences. After 8 years together, we decided to open our relationship.

Somehow, I came upon this thing called “financial security.” In 2014, thanks in large part to my blog’s success, my boyfriend and I bought a house. After 7 years of toiling at my desk in the living room of my apartment, I finally had the office of my dreams — and a closet dedicated to my sex toy collection.

I now fully believed in my work — and saw it as work. My writing was published in a book and I started teaching an online class for aspiring sex bloggers. Then, one night after I filmed my 2015 April Fool’s video, I was taking some selfies and looking cute when I spontaneously decided to put my face on the internet. There wasn’t much fanfare, nor did I want any. It was simple: anonymity was no longer serving me.

Nothing about it felt weird. In fact, it felt revolutionary.

So when my co-workers invited me to a sex party the next year, I had precedent. I found myself in a circle of people, going around the room describing our desires, playing consent-based Spin the Lube Bottle. That night, I fisted someone for the first time, and it was one of the most incredible sexual experiences of my life. “You are a miracle!” I exclaimed as my entire hand disappeared into their vagina.

We all felt it that night:Â the transformative power of fucking your friends.Â We gave our group a name — the femme sex covenÂ — and our parties have become a fixture of my sex life.Â Together, we are modeling radical consent, body positivity, and vulnerability. Eye contact. Cuddles and reassurance. Soft kisses and hard smacks. We are redefining the boundaries of friendship. We are showing each other unconditional love.

As tough as this job can be, it is a job I carved out entirely for myself — and I’m proud to tell people what I do. I test sex toys and write about it, and somehow the world trusts my opinions enough to buy stuff, and somehow that earns me a comfortable living. I work from home, in pajama pants with a cat on my lap. I’m writing. I’m making money writing. The thing I thought impossible.

Sex blogging taught me to trust my opinions — and my body. And it brought me to all of you.

Every single person who has ever emailed me or messaged me on social media to thank me. Every person who has recognized me and said hello. My parents, whose pride in my blog continues to astonish and humble me. My friends, mentors, heroes. I can’t possibly name all the people who’ve influenced my journey as a blogger, and I realize what an enormous gift that is. So many times I’ve laughed until my cheeks hurt, until I cried, putting my head on the shoulder of the person next to me — a friend I would not have if not for this. 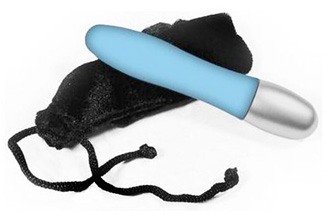